A UNSW Arts & Social Sciences panel at the Sydney Film Festival will explore cinema’s ability to cross borders and help refugees tell their stories of courage and resilience. 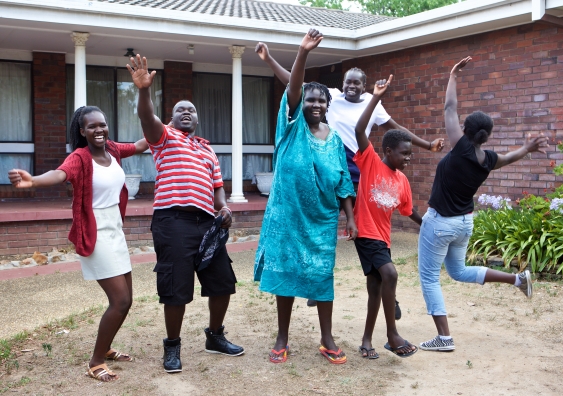 Constance Okot (centre) with her family made their home in Wagga Wagga after fleeing the civil war in Sudan. Photo: Sydney Film Festival

Director Belinda Mason first met Constance Okot in 2006 when making the documentary I’ll Call Australia Home. Constance and her husband had spent 10 years in a Kenyan refugee camp after fleeing the brutal civil war in Sudan and were among the first of 300 Sudanese refugees to settle in Wagga Wagga in 2005 after being granted humanitarian visas.

Mason’s film documented the everyday realities of settling in a new country and, while there were struggles, the future looked hopeful. But Mason, who kept in touch with Okot, became alarmed when Okot contacted her in 2014. “She said things weren’t really working out for her in Australia,” Mason says. “She was distraught.”

It became clear that the traumas Okot had endured were resurfacing and after visiting Wagga Wagga, Mason decided to make a new film to document the complexity of building a new life in a new country and illustrate the courage and resilience required.

Constance on the Edge has a sold-out screening at the Sydney Film Festival on 16 June. The day before, Mason and Okot will be part of a discussion panel, Refugees on Film – Cinema without Borders, presented by UNSW Arts & Social Sciences. They will be joined by Dr Caroline Wake, a research fellow at the UNSW School of the Arts & Media, and Zach Karpinellison, a UNSW film student who teaches at Bankstown Senior College. The panel will be chaired by Associate Professor Jane Mills, who teaches film at UNSW. 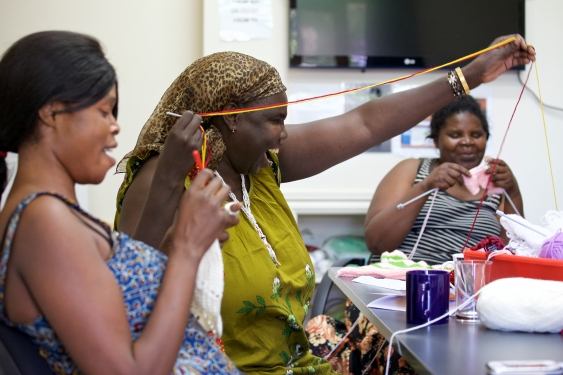 Constance Okot (centre) and fellow refugees from Sudan in the documentary Constance on the Edge. Picture: Sydney Film Festival

Constance on the Edge, which is nominated for the festival’s Documentary Australia Foundation Award for Australian Documentary, quietly but powerfully illustrates that, even with the kind of support that Okot and her family received in the beginning, making a new life can be fraught.

Okot’s son Charles, 23, seems the most vulnerable. Unable to fit in, he turns to drugs and makes several suicide attempts. Okot, who is no longer with her husband, is wracked with worry. Numerous episodes of everyday discrimination add to her depression and the once-feisty and ebullient Okot is seen taking a cocktail of medications and visiting a counsellor.

Mason says she wanted her film to capture the complexity of setting up a new life in a foreign land. “Some people settle within a couple of years but I think for a lot of people, they are so focused on learning the language and the everyday details of living here that their trauma is suppressed,” she says. “It’s only when they feel safe that they are able to focus on it.”

Mason believes cinema offers a more personal narrative and puts a face to issues that many find too big to grapple with.

“Even though in Australia we do well with early settlement services, we can make it better by building more inclusive communities across the nation,” she says. “That’s what I would like people to take from this film, and to gain some insight into the trauma these refugees have gone through.”

UNSW’s Wake agrees that cinema offers the chance to humanise refugees, who are often represented in the media as silent, anonymous bodies.

Every refugee has a different story, even though the refugee determination process and many media formats can make them look and sound very similar. Film allows those individual differences, and indeed those individuals, to emerge.

“Captions do not name them and articles do not explain their particular circumstances. When detail is offered, it is often a humanitarian worker or reporter who speaks on refugees’ behalf,” she says.

“In addition, refugees are often portrayed as the threat, rather than the threatened. So in a media culture that is dominated by images of refugees, films like Constance on the Edge offer rare images made in collaboration with refugees.”

Watching this film is a reminder that there is no single refugee experience and that there can be a diversity of experiences even within the same family, Wake says. Constance and her children have all had very different experiences of flight, refugee camps and resettlement, depending on their age, gender and even luck.

“Every refugee has a different story, even though the refugee determination process and many media formats can make them look and sound very similar,” Wake says. "Film allows those individual differences, and indeed those individuals, to emerge. Constance is a refugee – or was a refugee – but she is also a mother, a grandmother, a community leader, a self-described ‘elephant cub’, and a keen shopper and fashionista.”

With 12,000 Syrian refugees set to arrive in Australia, many of them resettling in regional areas, Belinda Mason is hoping to collaborate with those communities so they can see Constance on the Edge. “The intention is to start discussion,” she says. “That’s all we can do, start a conversation and maybe people will understand a little more.”