The close links between India and UNSW have been highlighted by the unveiling of a bust of Gandhi on the Library Lawn. 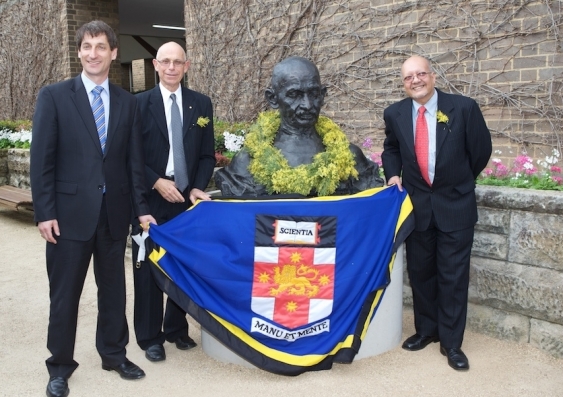 The close links between India and UNSW have been highlighted by the unveiling of a bust of Gandhi on the Library Lawn.

The bronze sculpture and a collection of books are a gift from the Government of India to the people of NSW and to the University.

The Consul-General of India in Sydney, Mr Amit Dasgupta, who presented the gift in October during the height of the student crisis, acknowledged the work being done by UNSW in maintaining close relations with the Indian community and providing a safe environment for Indian students.

At the unveiling, Mr Dasgupta said that education and globalisation are both key in spreading messages against violence.

"Gandhi was born in India, but he belongs to each and every one of you," said Mr Dasgupta, who spoke of the leader's message of non-violence.

The Vice-Chancellor noted that the sculpture is in one of the most prominent places at the University - and has already attracted much interest from students.

Mr Dasgupta, the Vice-Chancellor Professor Fred Hilmer and the Treasurer of NSW Eric Roozendaal unveiled the sculpture in front of other prominent members of the University, Indian and broader communities.

The event was held on the 100th anniversary of Wattle Day (1 September). Wattles are usually the first plants to rise from the ashes of bushfires and provide protection for other seedlings.

"Wattle is to be a lasting symbol of student safety at UNSW," says the Pro-Vice-Chancellor (International) Jennie Lang, who says that the plant will be grown around campus as a message of goodwill.

Education a game-changer in India-Australia relations