The Governor-General Major General Michael Jeffery has officially launched the Centre for Social Impact at UNSW. The Centre is aimed at driving social innovation by building the capacity of Australia's not-for-profit sector. 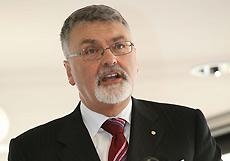 The Governor-General Major General Michael Jeffery has officially launched the Centre for Social Impact at UNSW. The Centre is aimed at driving social innovation by building the capacity of Australia's not-for-profit sector.

It will promote social innovation through teaching and research and by facilitating collaboration between not-for-profit and philanthropic organisations, business and government. It will conduct and support research to strengthen social enterprise in Australia, and act as a focal point for community engagement, dialogue and advocacy.

The Centre is based at UNSW's Australian School of Business, with links to the business schools at the other partner universities.

In officially launching the Centre, Maj. Gen. Jeffery said: "The Centre has a major contribution to make in providing first-class business teaching and research tailored to those who will be the social managers and entrepreneurs of the future, and to enhance the professional capacity of individuals who seek to create social and environmental value through leadership of not-for-profit organisations."

"For the three partner universities, as for the three business schools, the Centre bears testimony to the collective role we can play in providing socially responsible business management," said Professor Shergold.

UNSW Chancellor, David Gonski, who was instrumental in establishing the Centre, said the collaboration between three universities of such standing would mean great things could be achieved in the area of social innovation.

The Centre is being funded by a $12.5 million grant from the Australian Government to be matched by funds raised from the private sector. Professor Shergold paid tribute to Mr Gonski, Robin Crawford, Daniel Petre and Warwick Negus who together have donated $4 million to the Centre. He also recognised and thanked the Helen McPherson Smith Trust, which has contributed $1.5 million to endow a Chair at the Melbourne Business School.

The Centre's four year business plan, 'Building on Ambition' was launched at the event. The plan lays out the Centre's vision, goals, operational approach, strategic imperatives and performance measurement.

The new world of social enterprise