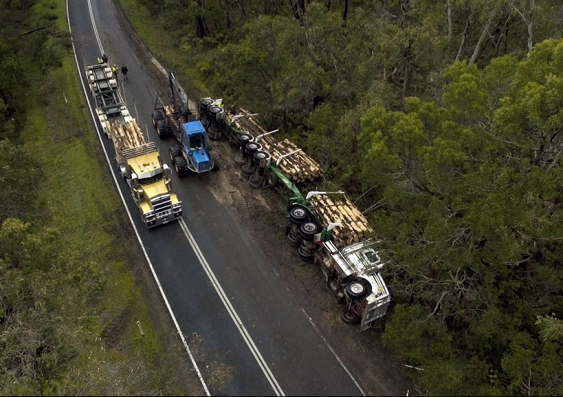 The driver escaped unharmed when this log truck he was driving rolled onto its side on the Portland-Nelson Road located about five hours south-west from Melbourne. About 200 people die every year in accidents involving trucks. In 2019, 53 truck drivers died on the job, with 34 per cent being a result of fatigue. (Photo: Shutterstock)

It has been three decades since Australia’s worst truck accident resulted in 21 fatalities. On October 20, 1989, a long-haul truck driver careered onto the wrong side of the Pacific Highway in NSW at 4am, crashing into an oncoming bus and killing half its passengers.

The annual road toll along that stretch of highway from Hexham to Queensland has since dropped from 53 deaths in 1999 to 15 in 2019, in part due to a 20-year infrastructure upgrade set for completion in 2020. And general performance in the trucking industry has also improved.

However, an average of 200 people are still killed every year across Australia in crashes involving trucks. 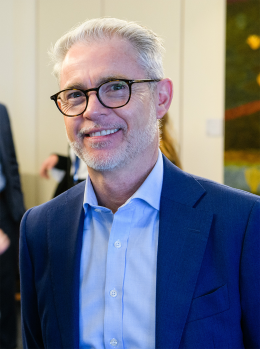 Dr Christopher Walker, a regulation and policy expert from UNSW Arts & Social Sciences, says Australia needs to put pressure on the trucking industry to improve safety standards. Relying on regulation through licensing will never be sufficient, he says.

“[Truck companies] respond to regulators to a certain degree, but they are also very responsive to the people with power — people who are giving them work, those who contract with them,” he says.

A reliance on stimulants

The autopsy of the truck driver who crashed into the Sunliner bus was found to have 80 times the legal limit of ephedrine levels in his blood. Ephedrine is a stimulant truck drivers are widely known to use to stay awake while driving long distances.

It is not uncommon for drivers to haul loads and work beyond the 12 hour daily limit, Dr Walker says, and an 80 or 100 hour plus working week is not uncommon. The legal limit is 72 hours over a seven day period.

“So they would go up and down to Sydney and Melbourne, it’s not unusual, four times a week,” he says.

“I've interviewed truck drivers, and they've said to me, ‘I'd get my pay in one hand, and my pills in the other’.

“They’d then go and drive and work well beyond the regulated 12 hours per day and may not have two consecutive rest days for 20 days or more.”

The final inquiry’s report Importance of a viable, safe, sustainable and efficient road transport industry is expected on 11 February 2021.  The report will also look at an enforceable minimum wage rate and training for drivers, better regulation in the industry, safety standards and nationwide infrastructure improvements. 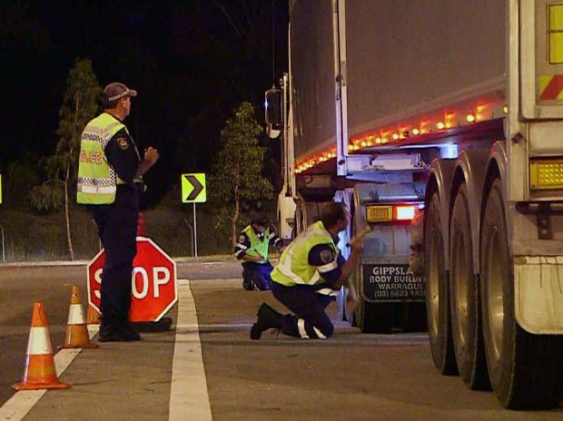 Police stop a truck to inspect it is roadworthy and up to industry standards. (Photo: Dr Christopher Walker)

The pyramid of Australia’s trucking industry

Dr Walker says Australia’s trucking industry is like a pyramid. The world’s biggest and most sophisticated trucking firms are at the top of the triangle. But a larger number of entry-level owners operate at the bottom, where cutting corners on safety is endemic.

“Because our economy is so dependent on trucking [to transport packaged and manufactured goods, as well as produce such as grain or livestock], we have these massive vehicles like nowhere else in the world,” he says.

“In the United States, B-doubles [prime mover trucks with two semi-trailers] are highly restricted in their movements,” he says. But here in Australia, even bigger B-triple trucks and road trains up to 53.5 metres are in regular use on our roads.

“So there could be a half-a-million-dollar rig carting $3 million worth of goods down the highway... that is more value than a small  aircraft,” he says.

Modern trucks have sensors that monitor breaking and fuel consumption, and their location and speed are also monitored around the clock every day of the year, he says. “Some of our truck drivers could be driving a vehicle that is as sophisticated and as valuable as a light aircraft, with the technology they're dealing with.”

“So, the owner of those trucks is more likely to ensure the vehicle performs efficiently and is safe because the costs are so high and the product is incredibly valuable.”

At the bottom of the pyramid, the smaller truck operators often work in demolition, excavation, and local freight and packaged goods movement, Dr Walker says.

“There’s all these little guys starting-up and leaving the industry. And they're the ones who can create a lot of risk as they try to become profitable,” he says.

“So the driver is [likely to be] the owner of the vehicle. If he wants to save money, he might neglect to maintain the vehicle. So he's usually the biggest risk.

“He might be the fourth owner of a second-hand truck and it’s maybe done one-and-a-half to two million kilometres. If he doesn’t maintain it, then when he’s going down the motorway his tyre goes ‘pop’, or he nods off to sleep. He’s the guy who is going to cause a problem.”

From June 2011 to June 2020, 1911 people have died on Australian roads in accidents involving trucks, according to statistics from the Bureau of Infrastructure and Transport Research Economics BITRE. And the death toll keeps climbing. 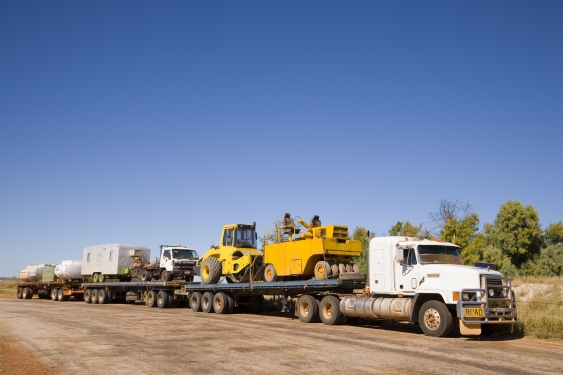 Dr Walker says owner operators only need to get their truck license, purchase a truck and register an ABN to start a trucking company in Australia.

“They don't have to prove they’re financially viable or that they don't have a compromised driving record,” he says, unlike in the UK where the industry is regulated through licensing in a process that is similar to the taxi industry in Australia.

He says trucking is such a competitive industry that entry-level owner-operators are regularly seen undercutting others on price. “They often do it by putting other road users at risk by working 16 hours a day six days a week, for example.” 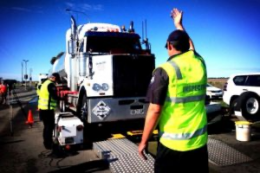 A truck is weighed to ensure it complies with regulatory standards. Overloaded trucks can contribute to the deterioration of roads after time. (Photo: Dr Christopher Walker)

Australia has two regulators – The National Heavy Vehicle Regulator (NHVR) and at each state and territory level the local transport and road agency regulator.  There are also industry safety schemes such as Trucksafe – that deliver safety guidelines, but compliance is voluntary.

Dr Walker says while the incentive for joining voluntary compliance schemes like Trucksafe and the National Heavy Vehicle Accreditation Scheme (NHVAS) are limited – if truck drivers and company owners meet these standards then their vehicles will be safer and run more efficiently.

“They can also advertise in the market that they’re a safe operator and that they're a low risk for losing product or having an accident,” he says.  “These schemes draw on market pressures to help drive home compliance and safety standards.” 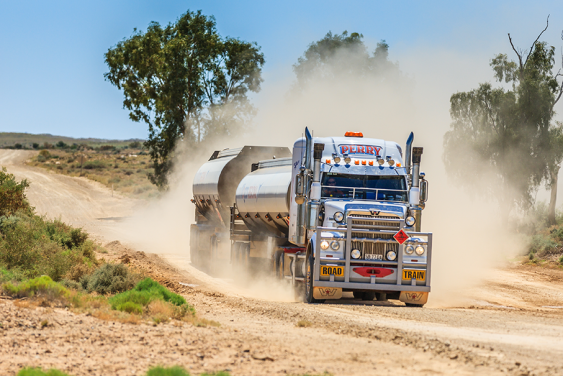 A long-haul truck drives along the Oodnadatta Track in South Australia. (Photo: Shutterstock)

There also has to be a better separation between the mix of traffic, with bicycle lanes and median strips to separate opposing lanes of traffic, he says.

“They can all be the best drivers in the world. But if there’s such a diverse mix on the road network, then ensuring that mix works well together is a high priority.”

Over the next 10 years, the federal government has promised to spend $110 billion on improving infrastructure to reduce the number of deaths and serious injuries on the roads.

But none among its current list of works includes widening a dangerous section of Victoria’s South Gippsland Highway, where a mother and her young son became the latest casualties following a collision involving her car, a ute and an oncoming truck on October 12. 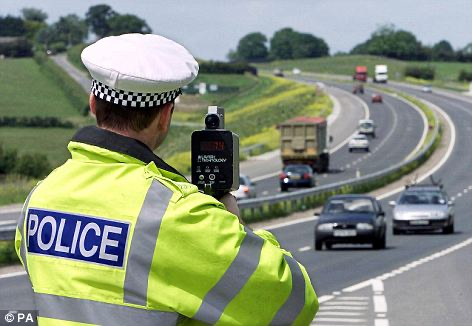 A policeman does a speed check along a stretch of highway that is separated by a life-saving barrier or median strip. (Photo: Dr Christopher Walker)