Opinion The IMF is showing some hypocrisy on inequality

The IMF has been raising concern about inequality since 2010, but this has not translated into concrete action within the fund's own policies and programs, write Christopher Sheil and Frank Stilwell. 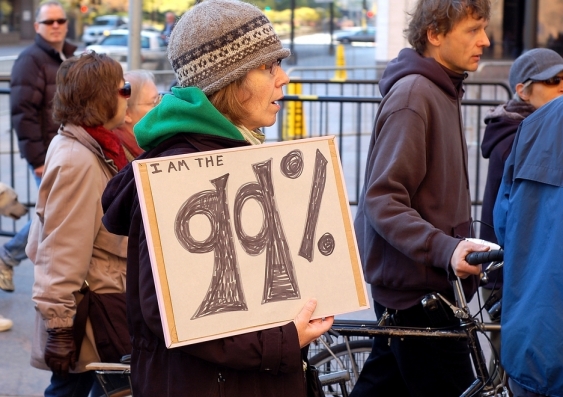 Lagarde was alluding to the wave of reactionary populism that’s currently sweeping the developed economies, and was harking back to her speech at Davos in 2013 when she warned that economic “inequality is corrosive to growth; it is corrosive to society”.

The IMF has been expressing public concern about inequality since 2010, but this has not translated into concrete action within the IMF’s own policies and programs, according to new research by British political economists, Alex Nunn and Paul White.

No references to inequality were added in 2014 when the IMF last reviewed the operational guidelines for its annual macroeconomic surveys, the grading of national economies, which it conducts in consultation with each of its member states (including Australia).

In a sample of 11 countries surveyed since the latest guidelines became effective, Nunn and White found little more than “very passing references” to inequality.

Nor has anything significant changed in the requirements that the IMF imposes on countries to which it provides financial assistance. The IMF reviewed the guidelines that shape the conditions on borrowing members in 2011-12 and revisions were introduced in mid-2015. The new “guidance on the guidance” accepts inequality as a concern, but only as secondary and subordinate to its long-established primary concerns with economic growth and fiscal discipline.

Nunn and White’s 11-country sample included all seven member states that have struck new borrowing arrangements with the IMF since the guidelines were updated. In every case, the IMF has continued to recommend fiscal discipline, and very few of the policies that could be used for reducing inequality have even been mentioned.

Challenging Piketty but getting it wrong

Another example of the IMF’s hypocrisy on this issue is its stance on research from French political economist Thomas Piketty. The IMF has criticised Piketty’s evidence and arguments on making the case for reducing wealth inequality.

A widely-reported IMF working paper, released last August, purported to show that there is “no empirical evidence” to support Piketty’s claim that growing inequality results from the return on capital exceeding the economic growth rate.

Less widely reported was Piketty’s patient response, pointing out that the IMF paper made the embarrassing error of confusing labour incomes with the return on capital, and that the latter was incorrectly estimated in any event.

Together, the IMF’s apparent lack of practical action and the sponsoring of this research paper reinforces the suspicion that Lagarde has failed to move “the IMF in the direction of looking at inequality as mainstream and core business”, as she boasted in Davos in 2015.

Why hasn’t the IMF walked the talk?

The IMF has long been criticised for tending to create the inequality it now claims to be tackling. Historically, its “structural adjustment programs” forced many poor countries to scrap welfare policies and pursue privatisations under the so-called “Washington Consensus”, exacerbating economic inequalities. This was the subject of a withering critique by Nobel-prizewinning economist Joseph Stiglitz in the wake of the East Asian financial crisis, and has spawned numerous protests around the world.

One reading of the IMF’s new high-level rhetoric is that it seeks to distance the institution from this history. It offsets the criticism while allowing the IMF to maintain its adherence to neoliberal policies. This is what Nunn and White refer to as “organised hypocrisy”.

A somewhat more sympathetic reading of the situation would be that, while the IMF’s commitment to managing the systemic risks that inequality presents for global economic stability and growth is real, the institutional barriers to implementation are formidable. Large organisations seeking to make a change of direction are often frustrated by internal struggle and institutional inertia.

It might also be be inferred that there is a need for greater support from the member states if reducing inequality is really to become a practical policy priority. This is because of changes to the operational guidelines for the IMF’s surveillance activities, including it’s annual economic surveys, in the wake of the global financial crisis.

The guidelines have been changed so that the IMF is more firmly guided by the economic objectives of its member states, whose social and political policies are supposed to be respected. Perversely, the central global body that many believe exacerbated inequality is now less able to redress the problem.

If tackling the general trend to increased inequality is to be a reality, the main political pressure still needs to be on national governments. In Australia, for example, we need a federal government committed to directly implementing policies to reduce inequality.

Dovetailing with these concerns is the more mundane matter of improving the distributional economic data. The aggregate income statistics in the standard national accounts need to be augmented by distributional measures, as recently modelled by a group of leading inequality scholars.

The current disconnect between national accounts and inequality data makes it difficult to know what fraction of economic growth accrues to the bottom 50% and the top 10%, and the relative income that goes to workers and owners. Nor do policymakers have a comprehensive view of how government programs designed to ameliorate the worst effects of inequality succeed.

This data should be of interest to any government that is serious about eschewing populism in favour of effective policies to head off the wave of discontent and destabilisation.

As a report for the Evatt Foundation last year showed, the distribution of wealth in Australia is dramatically and increasingly unequal. There’s no basis for thinking this country is immune from the corrosive effects of inequality on economic growth, society and politics.

So people should listen now, both in Australia and worldwide, as Christine Lagarde urges — including those who have apparently remained deaf in the IMF.

Calling time on indifference: How do we solve inequality?