Opinion Knit one, purl one: the mysteries of yarn bombing unravelled

There are many reasons why people get involved in yarn bombing, but the common thread is the desire to share a message – political or otherwise – with the community, writes Alyce McGovern. 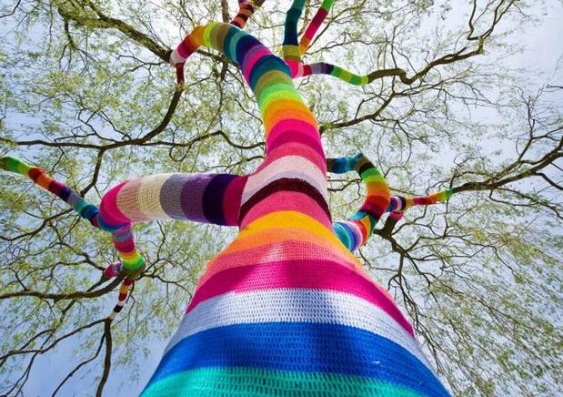 OPINION: Who exactly is behind the knitted bike rack cover that you walk past at the local park? And what is it that drives someone to cover a tree with intricately knitted creations?

Yarn bombing – the practice of using knitted or crochet yarn to cover (typically public) objects – is just one example of a range of new and creative forms of activism, as explored by Winnifred Louis and Emma Thomson in their recent Conversation article on protest in the 21st century.

I have conducted a series of interviews with yarn bombers in Australia and overseas – and I have been able to unravel some of the mysteries of the yarn bombers. Who are they and what it is that compels them to take their knitting public?

Yarn bombers take to the streets

The concept of yarn bombing is thought to have originated in the United States in 2005 when Texan shop owner, Magda Sayeg, unhappy with the bland landscape around her, decided on a whim to knit up a doorknob cosy for the shop. It attracted attention from passersby, inspiring Sayeg to venture further with the idea of covering objects with yarn, ultimately leading her to establish the yarn bombing crew,Knitta Please.

While Sayeg’s foray into yarn bombing was accidental, she spurred on a global community of yarn bombers, with yarn bombing crews founded across Europe, North America and Australasia.

Research on yarn bombers reveals that they span a range of demographic profiles.

While women constitute the majority of yarn bombers, it’s not unusual for men to get involved too. Yarn bombing is typically carried out by those in their 20s and 30s – but people in their 60s and beyond can also be found getting in on the act. One of the most active groups in Australia is Knitting Nannas Against Gas.

From my own research I have found there are a range of reasons why people get involved in yarn bombing, including: subversion, protest and art.

Yarn bombers get a kick from participating in something a little bit rebellious; and this subversion occurs on a number of levels.

They may be subverting norms about knitting and how it should be employed and enjoyed. Equally, yarn bombers may be about subverting ideals of the feminine and women as homemakers. They may even be seeking to subvert ideas about the space in which yarn bombing installations occur. As one Australian interviewee in her 50s told me:

[Women] use a very homemaker medium to go out in society, their society, their local area usually where they live and leave these craftworks around … they’re actually going out and doing something altogether very different and they’re attracted by the naughtiness of it and that’s interesting – the attraction that that has … it’s a safe way for women to be naughty because we’re not supposed to be naughty.

The notion of risk also plays a part in the excitement of the act. Another interviewee explained the feelings that were evoked when she first began yarn bombing:

I live in a country town, and word gets out about those sorts of things and there is a high chance of being seen by somebody … I don’t know … I thought someone might stop and go, “Hang on a minute, what do you think you’re doing? Aren’t you a respectable member of society?”

Many yarn bombers are drawn to the peaceful protest aspect of yarn bombing. Some crews have been known to rally around activist ideals in their installation activities.

One interviewee I spoke with felt that it was important for yarn bombers to have a message in their actions. She undertook her first project as part of the 350.org campaign for climate change awareness. More recently, such ideals have been evident in protests from the Knit Your Revolt Tricycle gang against Queensland’s anti-bikie legislation.

Another young Australian interviewee saw yarn bombing as a way for feminists to voice their opinions:

Some of the things that I wanted to do are very much feminist stuff as well. I know there’s a group of felters who make felt cervixes … And I actually wanted to do that as a campaign against sexual violence. Because if you think about the amount of people who draw penises and nobody blinks an eyelid. But a nice little knitted vagina …

By far biggest drawcard for yarn bombers, however, is the opportunity to beautify public spaces. A number of yarn bombers I spoke with wanted to reclaim sterile urban environments and give them a personal touch. One 30-something female interviewee from Canada stated:

Most of my yarn bombs are about beautification or just adding a little bit of colour to a space.

In this way, yarn bombers see what they do as a “good” form of street art. A female yarn bomber from Australia told me:

I mainly do it to beautify an area, especially if there is a lot of graffiti, I like to show that not all “tagging” is bad.

Ultimately, the common thread that connects the yarn bombers I have spoken to is that they believe the activity serves a broader purpose by sharing messages – political or otherwise – with the community.

As they say, this ain’t your grandma’s knitting!

Dr Alyce McGovern is a Senior Lecturer in Criminology at UNSW.

Crafting for good: why we all want to knit for penguins