The author of A Girl is a Half-Formed Thing, Eimear McBride, has described the method behind her unusual writing style at a Sydney Writers’ Festival event at UNSW. 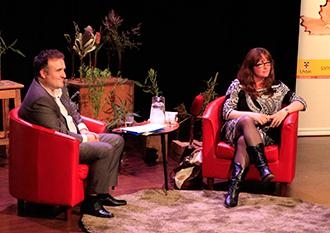 The author of A Girl is a Half-Formed Thing, Eimear McBride, has described the method behind her unusual writing style at a Sydney Writers’ Festival event at UNSW.

The book, one of the most talked about novels this year, is written in demanding stream of consciousness prose that has divided readers, who either love or loathe the debut novel.

The award-winning British-Irish writer spent six months writing A Girl is a Half-Formed Thing, and nine years getting it published. It has since created a sensation in the literary world and was recently awarded the Goldsmith's Prize which celebrates “creative daring” in fiction.

McBride, who originally trained as an actor, said her method-acting skills helped inform her writing.

“Acting is all about examining characters to bring them to their fullest realisation, I used this to really breathe life into the novel and get it up on its feet,” she said.

A Girl is a Half-Formed Thing is written from the perspective of a troubled young girl addressing her older brother who has brain cancer.

McBride was in conversation with Director of the UNSW Global Irish Studies Centre, Rónán McDonald, who reviewed her book for The Australian, describing it as“powerfully intense depiction of troubled girlhood written with uncompromising brio and fidelity.”

McBride read  the opening three pages of the book, written from the perspective of a baby in the womb using cropped sentences and rhythmic prose.

For you. You'll soon. You'll give her name. In the stitches of her skin she'll wear your say.

The author described reading James Joyce’s Ulysses as a defining moment in establishing her writing style. “I knew then that if I wrote, I would write differently,” she said. “I think language can do far more than it’s been allowed to do.”

McBride says she hopes the success of A Girl is Half-Formed Thing will encourage publishers to take more risks.

“It has appealed to a far wider audience than I ever thought it would, even my mother’s friends have read it and identified with it,” she added.

UNSW has hosted two Sydney Writers’ Festival events at the Io Myers Studio, the other was award-winning investigative journalist Jeremy Scahill who discussed his book Dirty Wars: The World is a Battlefield in conversation with Australian journalist Chris Masters. Listen to the podcasts of both events here.

UNSW Arts and Social Sciences has been a major partner of the Sydney Writers’ Festival for the past three years, and was the first university to partner with the literary event in 2010.

Numerous UNSW academics are taking part in the SWF as panellists or speakers and three UNSW students secured competitive internships at the Festival.