Dubious intelligence sharing and asylum seeker deals aside, Foreign Minister Julie Bishop’s visit to Iran is an important step in bringing the pariah state back into the international mainstream, writes Antony Billingsley. 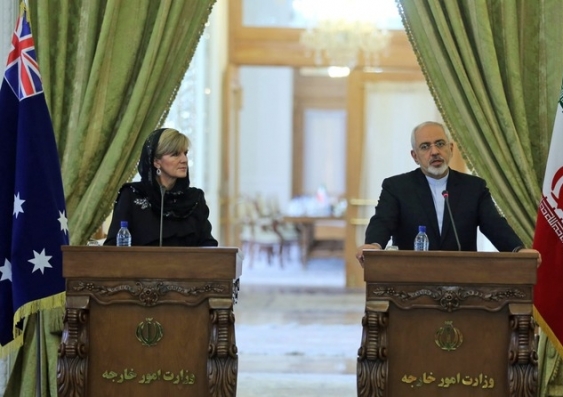 Foreign ministers Julie Bishop and Mohammad Zarif demonstrated a growing rapport between Australia and Iran in reaching agreement on some but not all fronts during her visit to Tehran. EPA

OPINION: Australian Foreign Minister Julie Bishop’s visit to Iran is potentially an important step in bringing Iran back into the mainstream international community. This follows years of self-imposed exile followed by isolation imposed by international sanctions. As a medium-level power, which built up considerable credit during its term on the United Nations Security Council, Australia is well placed to assist with this complex process.

In this way, Australia can contribute to measures designed to reduce the tensions and conflicts in the Gulf region and beyond in the Middle East. Australia has a degree of credit with Tehran as one of the Western countries that has maintained diplomatic missions in Iran over the past ten years or so. It would seem, moreover, that the foreign minister established a good relationship with her Iranian counterpart, Mohammad Zarif, especially while Australia was on the UN Security Council.

While it can be assumed that the government is consulting allied governments, including the United States, it is to be hoped that Bishop did not allow the impression to form in Tehran that Australia was acting as America’s proxy. We have our own interests in Iran and the region, which include seeing this troubled part of the world achieve peace and stability.

The recently concluded nuclear framework agreement between Iran and the five permanent members of the Security Council plus Germany is a major achievement. It must be hoped this leads to a detailed agreement on the Iranian nuclear industry. If that is achieved, we should see Iran resuming a significant and positive role in the world.

Certainly the region of the Gulf would be dramatically altered as a result of the changed atmosphere. We are already seeing, in the Saudi aggression in Yemen, states of the region starting to react to the emerging environment.

Trade was on the agenda of the discussions, with Australia seeking to promote its exports of primary products to Iran. In turn, Iran was expected to push Australia to end its sanctions on Iranian petrochemicals and to support the lifting of UN-based sanctions.

The international sanctions regime has damaged the Iranian economy and Iranians’ living standards. Iranian President Hassan Rouhani has set their removal as the most important objective of his administration. This will have a major impact on the nature of Iran’s “coming out”, as hard-liners in Tehran have made their acceptance of the nuclear deal contingent on the rapid removal of sanctions.

Much is being made of the deal announced at the end of Bishop’s visit for Iran and Australia to share intelligence related to the chaos in Iraq.

The arrangement is of considerable symbolic importance. It is a further sign of how much Iran has changed and of its growing international respectability. It is hard to imagine such an announcement being made a few years ago; neither side would have been interested in such a conversation.

We should not, however, overstate the significance of this agreement. The proposed sharing of intelligence is a very limited arrangement, apparently focused on attempts to track Australians who have gone to Iraq to join Islamic State.

The deal does not seem to involve the sharing of intelligence that might be relevant to the activities of the Australian troops in Iraq. It is, indeed, most unlikely that Iran’s intelligence agencies and the Iranian Revolutionary Guard would share substantive intelligence with us. The same could be said from the Australian perspective.

Despite the smiles while in Tehran, Julie Bishop could not get Iran to accept the return of asylum seekers. EPA

The most publicised and extraordinary goal of Bishop’s visit was getting Iran to take back asylum seekers who had made it to Australia’s jurisdiction. This takes Australia’s asylum-seeker policies to a new low as it is potentially a violation of the concept of non-refoulement.

This is based on the principle that people who flee their homes for fear of persecution should not be returned to the place from which they have fled. Non-refoulement is basic to the Refugee Convention, to which Australia is party.

The government claims only to be seeking to return those people whose refugee claims Australia has rejected, but our behaviour in this respect is so suspect as to raise widespread concerns about the nature of our determinations. We even saw the spectacle of Iran and Indonesia discussing their concern about the treatment of Iranian nationals in Australia.

Of particular concern is that the Australian government should be trying to forcibly return people to a country where the human rights situation remains dire.

Rouhani has tried to promote improvements in his country’s human rights. However, the area has been used by hard-liners in Iran to push back against the president’s planned reforms and to undermine his success in the nuclear energy field. Indeed, the situation in Iran has been deteriorating since Rouhani came to power.

Iran has been criticised by the UN Human Rights Council. A report to the council in March observed that the number of executions in Iran was the highest in 12 years and noted a marked decline in the rights of women, minorities and prisoners of conscience and increased restrictions on media freedom. The UN Secretary-General and Amnesty International have seconded these concerns.

It is hard to imagine how the government might consider forcing refugees to return to Iran in such circumstances, regardless of whether we regard them as genuine refugees or not. The lack of agreement so far on this issue might suggest that the Iranians thankfully rejected this Australian request.

Still, Bishop’s visit to Iran is an important indication of our seriousness in dealing with Iran. Australia can play a small part in that country’s constructive re-engagement with the international community.

Are we stumbling towards a war with Iran?