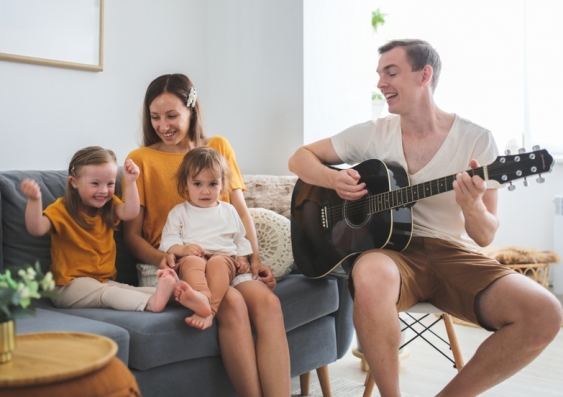 The theatres are black and performance spaces are down. COVID-19 may have delivered a devastating blow to the arts sector, but the world is witnessing an extraordinary renaissance in the arts from households in social isolation.

Italians are singing from balconies and Manchester residents are performing social distance Zumba in the street. Children are painting rainbows for their windows, dogs are getting a voice and families are collaborating in song and dance.

According to the Head of the School of Arts & Media at UNSW Sydney, Professor Michael Balfour, the world is witnessing people’s yearning for social connection through the arts.

“People want to participate, and people want to engage in things. People need to feel that they belong and are part of a social community… it’s what the core essence of art is about,” he explains.

The Professor of Theatre and Performance says what is happening online is similar to the research that emerged from a five-year study, In Place of War, which looked at the role of theatre and arts during conflict. The research led to the development of a global network of artists that use creativity as a tool for positive change.

“We were really interested in how the role of the artist changed in the periods from peace time into extreme violence, war and conflict.”

The study looked at 12 different conflict zones, ranging from Congo, Sri Lanka and Northern Ireland, and involved interviews with 80 artists.

“We asked the question ‘why create art in this kind of extreme situation?’ We found the arts increased three-fold in times of crisis, and we found that absolutely fascinating. These were in extreme situations where civil society had been destroyed. (There were) lockdowns, curfews, violence and death all around. But artists and audiences still wanted to see art, theatre and performance.”

Prof. Balfour draws an analogy with the current COVID-19 crisis and physical distancing.

“A lot of the leadership and media rhetoric has been that we on a war footing,” he says. “We haven’t seen these kind of circumstances since the Second World War. The French President Emmanuel Macron talks about the invisible enemy, for example. These are incredibly challenging situations.”

He says as his study showed, art is helping to connect people who are in isolation under these extreme circumstances.

“I think when we were looking at the case studies in wars, it’s similar to the stuff that’s happening online at the moment. The quality of a fully produced show stops being so important and what becomes important is the sharing and the communication that goes on between a performer and an audience member.”

People need to feel that they belong and that they are part of a social community, and the core essence of art is that everyone is a storyteller, Prof. Balfour believes.

“When you strip it back, it goes back to a slightly cliched image of us sitting around a fire, sharing stories. Each person takes a turn to tell a different kind of story. And there’s no privileging of status or someone calling themselves an artist, it’s just everyone is a storyteller and it doesn’t matter if they are a good or bad storyteller, or whether the story is long or short. That’s similar to what we are seeing now.”

He says social connection “is a really important tenet of what we are as human beings”.

“(Art) helps us to commune, which is to come together…(it helps us) to laugh, and laughter is a brilliant thing in times of crisis.”

Art also helps us to reflect and console, he explains. “A lot of music at this time is used as a way to calm the body down, to calm the thought process down, to find a point at which your psyche can settle.”

Prof. Balfour says that what gets privileged in times of crisis is the value of authenticity and vulnerability so people “broadcasting or uploading from their spare room and rock artists improvising and sharing half written new songs.

“The makeup has come off, the showbiz polish of production is no longer there, and you’re kind of back to the bare bones of what art is, which is this ability to have people connect and communicate and share ideas, messages and feelings and emotions, the affective elements of communication, which becomes really critical moments of survival in these times. It’s what keep us human.”

Thou hadst better avoid getting teary – and King Leary – this Christmas