Opinion Protect the cultural icons that speak to our future 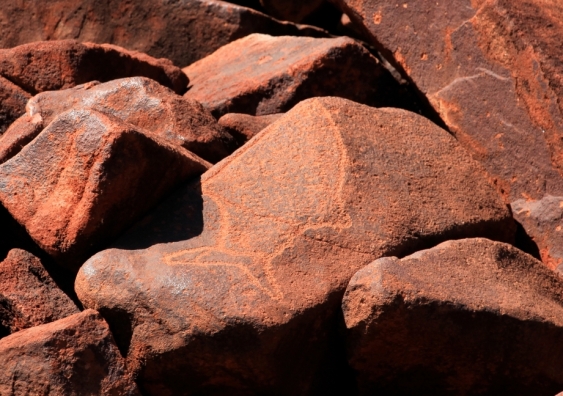 BHP recently said it will not damage 40 Aboriginal heritage sites which it received ministerial permission to destroy without “further extensive consultation” with traditional owners, the Banjima people, after outcry over Rio Tinto's destruction of Juukan Gorge. Fish engraving on the Burrup Peninsula in the Pilbara, Western Australia. Photo: Shutterstock

The death of George Floyd under the knee of a Minnesotan police officer has re-sparked tensions about the statues we have in public spaces that speak silently on behalf of our societies.

Governments around the world protect these statues under heritage law and charge those attempting to deface or remove them with property destruction, as evidenced in Sydney on Sunday where two people were charged with defacing a statue of Captain James Cook.

In the United States, United Kingdom, and Belgium, governments have similarly protected controversial monuments, including the statues of confederate generals, slave owners, and cruel colonial overlords under cultural heritage laws.

However, such actions by states betray the spirit of the heritage laws that governments notionally seek to uphold.

When the United Nations Educational, Scientific, and Cultural Organization (UNESCO) was created after World War II its mandate included the protection of cultural heritage. Since then it has shaped how heritage is protected in the 193 countries that are parties to it.

The UNESCO Constitution says that culture is important to safeguard peace and that ignorance about each other’s cultures often contributes to conflict. In this way, culture, and cultural heritage more specifically, is about the society we want to be, not the society we once were.

That is the spirit in which laws protecting heritage need to be applied: does that heritage tell an important message about our aspirations?

A society that reinforces the exploitation of minorities, or protects symbols designed to oppress them, is not a society we should aspire to be. In the United States, most confederate monuments were created while the civil rights movement organised in that country. Those monuments were meant to intimidate and belittle African Americans.

While the intent behind erecting James Cook statues in Australia may be different, the effect is the same: they reinforce a worldview in which icons of the past, the ones that oppressed the First Nations of this country, are valued over Indigenous peoples themselves. In this way, heritage law becomes another weapon in the legal arsenal that has long oppressed Indigenous peoples.

Those arguing for an indiscriminate commitment to protecting the past should at least be consistent and apply it across the board – which would include Indigenous heritage. They must justify why it is okay to punch down and destroy Indigenous heritage but not to punch up and remove heritage of colonialism.

Black and Indigenous people have waited long enough for the rest of us to get our act together and change the narratives around oppressive monuments, and to protect the heritage Australia promotes around the world as part of its distinctive appeal.

Now is the time to make way for the society we want to be, and to understand that the purpose of heritage law is not to protect an oppressive past but lead us to a better future.

Lucas Lixinski is an Associate Professor at Faculty of Law, UNSW Sydney and author of International Heritage Law for Communities: Exclusion and Re-Imagination. Twitter: @IntHeritageLaw