Release the hounds: democracy dogs are off the leash

They might be strays but the dogs of Athens represent hope, dignity and the human capacity for kindness in a new film by UNSW's Mary Zournazi. 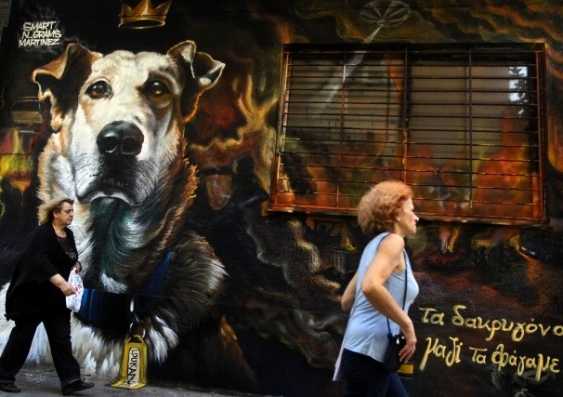 Loukanikos, a constant presence in anti-austerity protests in Athens, holds a special place in the hearts of locals.

It has taken almost three years since she had the first germ of an idea but on 14 December Dr Mary Zournazi will be settling in for a special screening of her first feature film Dogs of Democracy at the Australian Documentary Forum’s final Oz Dox event for 2016.

Dogs of Democracy was filmed in 2015, when Greece was in the grip of the austerity crisis and Athens was convulsed by almost daily protests. While ostensibly a tale about the stray dogs of Athens, who mirror Greece’s vulnerability within Europe, Zournazi’s film has a deeper message about hope, dignity and the human capacity for kindness.

It is also a rumination on the idea of democracy, which has been brought into sharp focus through recent political upheavals including the Brexit vote and the US Presidential election.

“When I visited Greece it was very tense and a difficult time but at the same time I noticed these dogs living around the main square and became fascinated by them,” Zournazi says of her first visit to the country to explore her Greek heritage. “But I also became fascinated by the people who look after the dogs, and what this might say about what was going on – a different way of living, a different ethic about how to care.

“I immediately thought: What’s the relationship between the dogs and the people? And what does that tell us? In a way, it was about what the dogs themselves could teach us about dignity, and their sense of conducting themselves in the world.”

The Greeks have a word for this concept: philoxenea, which means to provide kindness to strangers; to receive “the other” as a friend; to welcome the outsider. This philoxenea is at the heart of why strangers care for these stray dogs and for Greeks hit hard by the crisis.

The film depicts older people whose lives have been devastated and have suddenly found themselves out of work and having to beg. Zournazi saw people the same age as her parents having no other options but to sit on street corners while strangers silently gave them money.

“What I had seen around the crisis mostly was sensationalism and riot police and the horror stories, and while they are true, I wanted a more gentle way of telling the story so it might have more impact and reach more people,” she says. “For me it was important to tell a story about people’s lives.”

Zournazi, a Senior Lecturer of Sociology in the Faculty of Arts & Social Sciences, has a 20-year career making radio documentaries but Dogs of Democracy is her first foray into a feature-length documentary film. 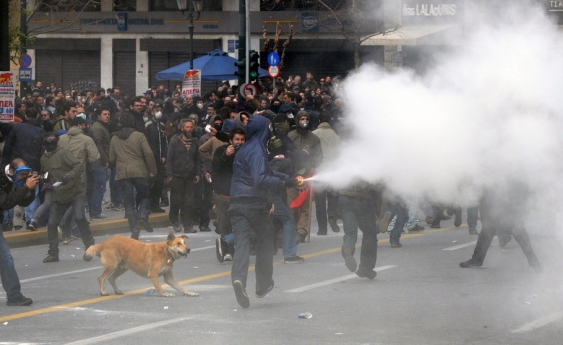 Loukanikos was usually in the thick of the action when anti-austerity protesters took to the streets in Athens. Photo: Kostas Koutsaftikis/Shutterstock

It builds on her short radio documentary In Search of Loukanikos, about a famous Athens stray that began attending political rallies as a puppy in 2006 and became a regular fixture on the front line of the anti-austerity protests around Syntagma Square.

Loukanikos became an emblem of the popular revolt, described by one Athenian as representing the spirit of freedom. As actor Lex Marinos notes in the film, Loukanikos stood for something that the Greeks were not able to articulate. “You stand in front of these troops and you bare your fangs and say you’re not going to take this.”

Much of Dogs of Democracy is shot from dog height, providing the canine perspective, and the music helps each animal’s distinct personality come through.

“The Greek composer K.Bhta very kindly donated his music. I listened to all of the tracks he gave me and started to think which music would go with which dog, to get a feel for the dogs and their movement and character. His music worked very well with some of the animals to really accentuate their personalities and also helped give a special character to the whole mood and feeling of the film,” Zournazi says.

“But I also wanted to remember that they’re animals, they’re not people. Although I’m filming this from a dog’s point of view, you really can’t know what’s in a dog’s consciousness. It is a human telling the story. We can only say that we notice these characteristics of dogs like loyalty and dignity. They represent these qualities, even though they don’t know what they are.” 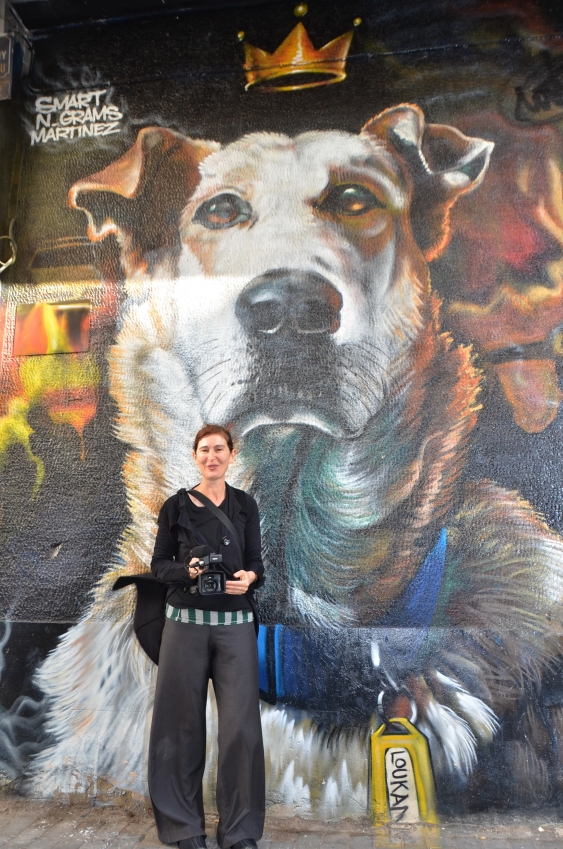 Mary Zournazi with a mural of Athens' most famous stray dog, Loukanikos.

As well as the canine cast, Zournazi interviewed people for whom the dogs are important: unemployed man Spiros, whose days are given structure and meaning by caring for the animals; writer Jina Politi, who felt safe during the 2011 protests with Loukanikos nearby; volunteers who enjoy the sense of community that caring for the strays brings them; and Greek novelist Alexis Panselinos, author of the short story Indignant Yellow Citizen.

Zournazi belives philoxenea is still practised in Greece, although the economic crisis has bred racism and xenophobia and left it not as strong as it once was.

“Not everybody practises it because Greece has also got its right-wing elements who want to get rid of anyone who’s foreign. But I think, given Greece’s history, there is a capacity to want to help. You don’t turn away people, you offer them food and whatever else you can.”

She credits her producer, award-winning documentary maker Tom Zubrycki, with giving her the training she needed to shoot Dogs of Democracy, and offering advice after her early attempts. “I’m very grateful that he has backed it because he’s amazing and his expertise has been such a gift,” she says. 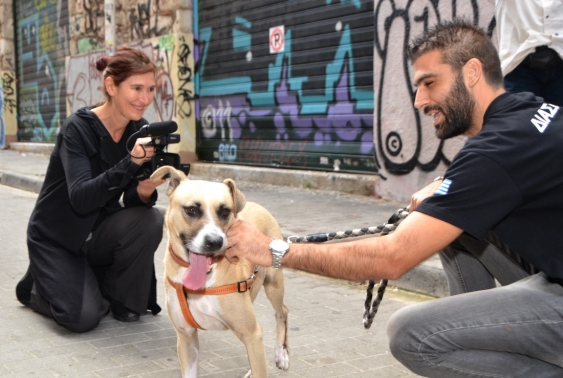 Zournazi did a lot of the filming from dog height to provide a canine perspective.

The film has been entered in 25 international festivals and will be distributed in Australia by Ronin Films. Nobel Prize winning author and animal activist JM Coetzee called Dogs of Democracy “inspiring”, saying “the big-hearted dogs of Athens, and the generous Greeks behind them, are able to shine a light for us in the midst of the present neoliberal darkness”.

Zournazi has another film in the pre-production stage but it will take two to three years to complete. “It’s about exile and migration and music. That’s as much as I can reveal now,” she says.

She is also working on another project with Oscar-nominated German filmmaker Wim Wenders, her collaborator on the book Inventing Peace.

“I think it’s important to make films of significance, to actually communicate global issues and global problems,” she says. “That’s our duty as researchers and as filmmakers – you’re responsible for what you create, and in that responsibility you really should be able to communicate what problems there are and what’s going on in the world rather than it being just sensational or about entertainment.”

The Oz Dox special screening of Dogs of Democracy is on Wednesday 14 December at the Australian Film Television and Radio School (AFTRS) in the Entertainment Quarter, Moore Park. See more details here.