ANZSOC’s Adam Sutton Award for 2019 recognises the impact of the Safety, Sexual Harassment and Assault at Australian Music Festivals project. 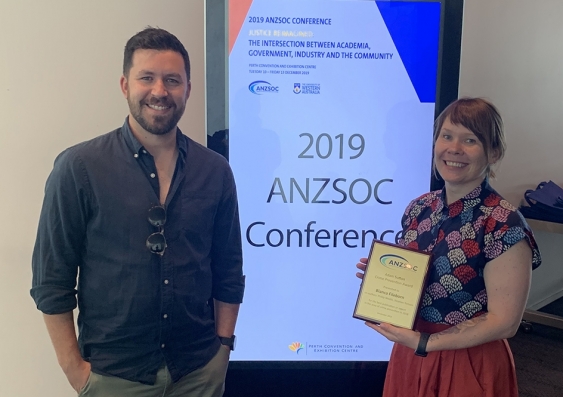 Dr Phillip Wadds, from UNSW Arts & Social Sciences, has received the Australian and New Zealand Society of Criminology’s (ANZSOC) Adam Sutton Crime Prevention Award along with his two report co-authors. The award is given each year to the crime prevention publication or project that best demonstrates pragmatic, workable solutions to Australasian crime problems, and reflects the values of a tolerant and inclusive society.

In July, the UNSW Criminology senior lecturer released the Safety, Sexual Harassment and Assault at Australian Music Festivals report with co-authors Dr Bianca Fileborn (University of Melbourne) and Professor Stephen Tomsen (Western Sydney University). It is the first Australian – and one of the few international studies – to investigate sexual violence at music festivals.

According to the award selection committee, the researchers “provided a thorough and concrete list of prevention strategies that will be of practical interested to government and non-government stakeholders”. They also described the report as “an excellent example of community-level research with a crime prevention focus”.

“The award is great, but what I am most happy about is the traction our research has received with those who are in a position to make festivals safer,” Dr Wadds said. “We have developed really productive relationships with the music festival sector, including major festival promoters, and have presented our research to key police and health agencies. Most excitingly, our research recommendations have been implemented into key policy documents designed to reduce harm at music festivals.”

The research included a survey of 500 patrons of the 2017/18 Falls Festival, on-site observations, and interviews with victim-survivors of sexual violence at any Australian festival. The project found that while more than half (61.5%) of the participants said they usually felt safe at music festivals, a majority also said they believed physical violence (92.8%), sexual harassment (95.1%) and sexual assault (88.6%) occurred.

Dr Wadds said, “Our findings highlight the complexity of festival settings. They are, on the one hand, really exciting and fun spaces where people are generally having a good time, but are also spaces where the harms experienced can be really significant and have ongoing impacts on the lives of those who are affected.”

The report provided recommendations to combat sexual violence at festival events – including a series of practical steps for organisers, service providers and patrons that emerged from the research.

“Firstly, festival organisers and promoters need to set really clear and consistent standards of behaviour for their events, and they need to back them up with action if and when an incident occurs,” Dr Wadds said. “If people sexually harass or assault others, patrons need to know there will be serious consequences, and victims need to know their reports will be taken seriously and managed with appropriate sensitivity.”

Secondly, the report recommended training for festival and security staff in appropriate ways to deal with reports of sexual harassment and assault. This should be accompanied with improvements to surveillance, signage, lighting and better access to safe spaces and counselling services.

Patrons themselves also need to be part of the solution.

“Everyone working at and attending a festival needs to be part of producing an environment that is safer,” Dr Wadds said. “We need to build an ethic of care into festivals and start to break down the more problematic aspects of culture that facilitate, excuse or actively promote sexual violence. As the primary perpetrators of violence at festivals, a lot of this responsibility falls to men in this space.”

The report also recommended further nationwide research across a broader spectrum of festivals. “Hopefully the next phase of this project will build a more complete national picture of the diverse experiences people are having at festivals,” Dr Wadds said. “This will help us improve the evidence base to develop good policy.”