Johannes Luetz’s research has taken him across the globe in a bid to find more sustainable solutions for climate change migrants. 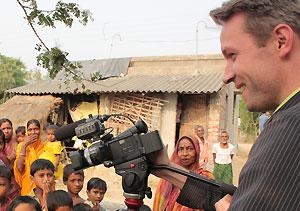 Johannes Luetz’s research has taken him across the globe in a bid to find more sustainable solutions for climate change migrants.

“Every year millions of people are displaced by droughts, floods and storms,” says Luetz, a PhD student in the Faculty of Arts and Social Sciences and the Institute of Environmental Studies.

"Combined with global megatrends such as population growth, environmental degradation, resource depletion and sprawling slums in developing countries it is beyond doubt that the coming years will see many millions more forced from their homes.”

“My thesis takes a humanitarian approach because I engaged directly with climate migrants to find out how they feel about relocation and what solutions they envisage,” he says.

Luetz’s research shows that residents overwhelmingly want to remain where they live. He says this makes the introduction of adaptation measures in their countries an urgent priority.

“Positive migration outcomes need to be led by migrants themselves but accountable and responsive government institutions also have a key role to play.”

“Preparedness means getting ready before the need arises. This is always preferable to ad hoc displacements brought about by sudden floods and storms. Preparedness is a major success factor,” he says.

After a pilot study on Tulun Atoll in the South Pacific, Luetz travelled to Bolivia to study drought and migration, then to slums in Bangladesh and India to study the effects of cyclones on migration. He has also assessed artificially raised concrete islands in the Maldives, and resettlement villages for typhoon flood victims in the Philippines.

“I met with Island Chief John Kela on the small island of Matsunga - parts of his island had already disappeared under the sea and several areas were showing significant signs of erosion,” Luetz says.

“Given sea level rise predictions are around one to two metres this century, it was easy to connect the dots, by the end of the century his island would simply no longer exist.”

Listen to Luetz discuss his research on the ABC Science Show

Sleepless in Sydney as UNSOMNIA rolls out