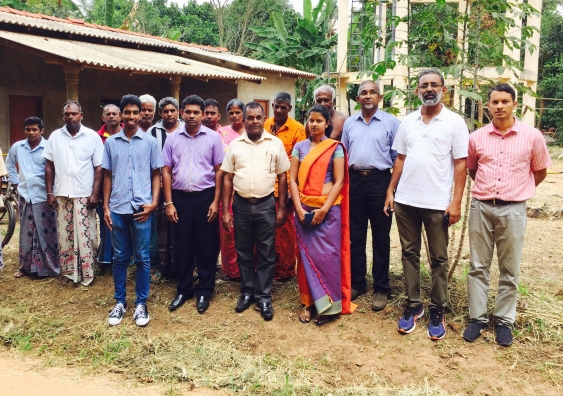 Buddhi Ranasinghe, a founding member of Impact Engineers, with villagers.

Before the students left to catch their flight back to Sydney, one of the village elders rose to speak. “There are a lot of people in our village. I am old and can’t see properly and I will die soon, but this program is so valuable to my younger generations,” she said. “We are lucky and blessed to shine under your graciousness. This is a great act of merit. May you be reborn in a time when the Buddha exists and attain the supreme bliss of Nibbana!”

Buddhi Ranasinghe says this impassioned speech made the reason for him being there as crystal clear as the water they were aiming to provide.

“I’m Sri Lankan and prior to coming to UNSW, when I was 17, I lived my whole life there. I was aware of the struggle farmers in my country faced but had never been face to face with the problem before, so the trip was eye-opening for me,” he says of his first visit to the village.

Ranasinghe, who is in his third year of Chemical Engineering at UNSW Sydney, says the idea for Impact Engineers took root after he and six Sri Lankan friends (from the faculties of Engineering and Business) undertook an independent school outreach program in Sri Lanka in their first year (funded by the NSW Chapter of the Institution of Engineers Sri Lanka), then won a hackathon run by UNSW.

“After we won the hackathon we decided to take a formal proposal to the Student Opportunities team at the Engineering Faculty with ideas about humanitarian projects we’d like to do in Sri Lanka. They were very supportive, providing advice and contacts which helped us clarify our ideas and get started,” Ranasinghe says. 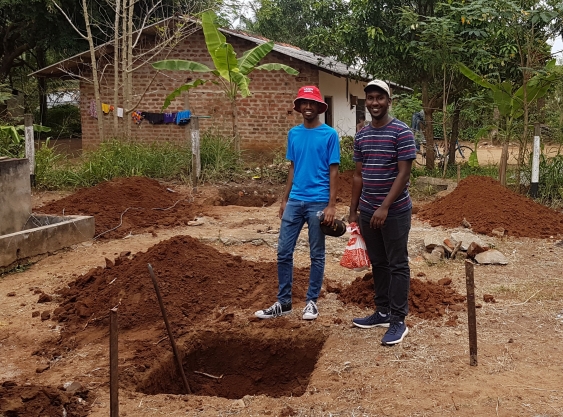 Buddhi Ranasinghe and Tharitha Murage at the work site.

In six months they had raised almost $20,000 from sponsors and a Go Fund Me campaign, consulted with multiple stakeholders in Sri Lanka and Australia, identified two villages in need of a clean water supply, and visited the villages to prepare for the installation.

“Because of our focus on consultation, when we finally reached the villages in January we didn’t find a desperate bunch of people waiting to be rescued, we found an organised group ready to hit the ground running,” Ranasinghe says.

The area around the two villages is primarily agricultural and produces a variety of crops, including rice, long beans, corn, lime, guava and coconut. The villagers have long relied on a decentralised raw water system, but the water it produces is not thought to be suitable for long-term human consumption and the villagers spend a large portion of their income buying water privately.

Once operational, it should have the capacity to deliver 10,000 litres of clean water per day to more than 600 families. Longer-term, the daily operation of the plant will create at least three jobs in the village, with a projected annual income of about $30,000.

All profits will be reinvested in the villages and there is also an educational component to ensure they are building capacity for the villages' future success.

“We will be conducting a 12-month education program with local partners at the University of Peradeniya and Sathi Pasala Foundation. We are designing two streams of modules – one in STEMM subjects and the other in entrepreneurship and business development as a catalyst for Dilena Tharu to achieve economic prosperity,” Ranasinghe says.