Opinion Stay in school or take to the streets? Climate change lessons

School students who demand meaningful action on climate change deserve to be heard, not silenced. 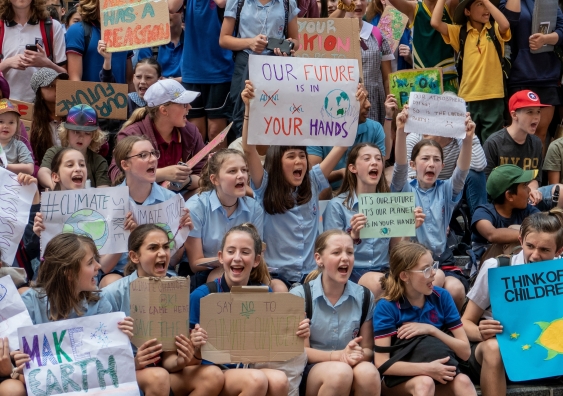 As I commenced writing this, a few days before the March 15 School Strike 4 Climate Action, the Australian event website flagged over 50 Australian cities and towns where school strikes were planned – a figure increasing daily. These events are part of a larger global School Strike 4 Climate Action that day, with many of the participants having been on strike on recent Fridays.

An individual initiated this movement – Greta Thornberg, who at 15 went on strike alone outside the Swedish Parliament to put a spotlight on climate policy, or rather the lack of a substantive climate policy. Since then, and in less than a year, in addition to initiating the global School Strike movement, she has: spoken at the World Economic Forum at Davos; delivered a TED talk; single-handedly changed European Union (EU) climate policy; and fronted many global leaders, including the UN Secretary General, to scold them for their inaction on climate change.

I was privileged to hear Ms Thornberg speak at the first event of Extinction Rebellion, the Declaration of Rebellion, outside the UK Parliament in London late last year. This movement is now global, with the NSW Extinction Rebellion Declaration Day later in March in Sydney. This is symptomatic of a broader global communal shift where worldwide publics are not only bemused and confused by political inaction on climate change, but also increasingly anxious and alarmed, particularly at the attitudes of many of their supposed peers (some of whom are still calling for more coal-fired power stations).

Climate change is now a threat challenging the very conditions of existence, particularly those of these school students, whose future is palpably threatened. The vigor, dynamism and growth of this movement parallels, and arguably exceeds, that of past exhibitions of vigorous public disquiet, such as those on public policy regarding the Vietnam war and apartheid, and should be of intense concern to any practising politician.

It is important to remember that the Intergovernmental Panel on Climate Change (IPCC) 1.5C Report, released last October, not only underlined that a 1.5C trajectory is the only one compatible with preventing many millions of deaths, but would require not only a complete transition to Renewable Energy by 2030 but also many other significant changes, such as OECD countries transitioning to a vegetarian diet within the same time frame.

While one can only empathise with the school kids, they continue to amuse with their eloquent humour. One poster I well remember from the last School Strike expressed how the striker had observed ‘smarter cabinets at Ikea’.

The constant call from politicians for the school kids to attend school, and heed their lessons, has earned many articulate rebukes – for example, they would not be on strike if those politicians had attended to their lessons when at school.

A recent remark by the NSW Education Minister, Rob Stokes, was greeted by Ms Thornberg herself, who noted that they’d heard him and that his comment deserved a place in a museum.

It’s only appropriate that I conclude with the words of a Sydney striker who, in response to the Deputy Prime Minister’s demand that they stay in school retorted: “We can see that our politicians refuse to listen to the educated, so why should we be sitting in history class when we could be on the streets making history itself?”

Stephen Healy is a Senior Lecturer in the UNSW Faculty of Arts & Social Sciences' School of Humanities and Languages, and is the faculty's Research Coordinator for UNSW's Centre for Energy and Environmental Markets. He is among more than 300 Australian academics, including a number from UNSW, who have signed an open letter supporting the students participating in School Strike 4 Climate Action. He signed, convinced it is imperative that those subject to the worst impacts of climate change, the school children, are given a voice.

Read more: The future of action on climate change is in good hands