The stigma of sex work comes with a high cost

For sex workers, legal, cultural and social discourse is characterised by prurience, titillation, outrage and disgust – all the hallmarks of stigma, writes Zahra Zsuzsanna Stardust. 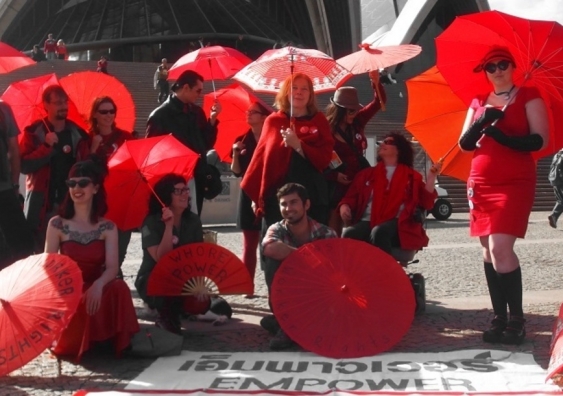 The sheer weight of stigma is an intergenerational burden passed on – and held by – sex workers. Scarlet Alliance, Author provided.

OPINION: Stigma is a mark of disgrace, a social discrediting, or a spoiled identity. For sex workers, legal, cultural and social discourse is characterised by “prurience, titillation, outrage and disgust”.

Narratives of sex work as undesirable and sex workers as disposable victims are heavily steeped in our cultural imagination.

We need only think of the differential media treatment of the murders of Jill Meagher and Tracy Connelly to learn that sex workers’ lives are deemed less valuable. Or the Courier Mail’s reporting on the horrific murder and dismembering of Mayang Prasyeto (ruled “offensive” and “gratuitous” by the Press Council), and Mia Freedman’s infamous comments on ABC’s Q&A that:

No little girl grows up wanting to be a sex worker, thank heavens.

Examining the individual and institutional treatment of sex workers reveals how sexuality is organised and stratified, and how certain kinds of intimacies are rewarded or punished. It exposes the ways in which the state “has a sexual agenda” and demands mechanisms for accountability and redress.

Research has uncovered discrimination against sex workers in access to goods and services, housing and accommodation, employment opportunities and justice.

Sex workers report having their Airbnb accounts suspended, their PayPal accounts closed down, and being banned from advertising.

Both the Salvation Army and Family Protection Society have publicly apologised to sex workers for further stigmatising sex work in their fundraising campaigns.

Stigma is compounded for sex workers who work for survival, use illicit drugs, are trans or gender-diverse, Aboriginal or Torres Strait Islander, migrants or culturally and linguistically diverse, are parents, or work on the street. These communities experience disproportionate levels of policing, harassment and criminalisation.

Sex workers living with HIV have been incarcerated, despite no evidence they have transmitted HIV or engaged in unsafe practices.

Discrimination is not an isolated experience. A New Zealand teacher who posed for Australian Penthouse was deregistered. In the US, a woman was charged with conduct “unbecoming a teacher” for merely writing about her prior sex work experience.

Stigma manifests in policy and regulatory frameworks that criminalise or licence sex work, require sex workers to have mandatory medical testing or permanent registration on police or government databases, prohibit sex work from being visible from churches and hospitals, and local council policies that treat brothels as “outlaws”.

Stigma puts sex workers at risk. Criminal and licensing laws create opportunities for violence where sex workers have to choose between safety and legality.

Mere knowledge of someone’s sex work can be used against them by abusive partners, as blackmail or suggesting they are unfit parents in custody cases.

Stigma is socially isolating. It reduces the options for sex workers to turn to for support and is recognised as a critical barrier to accessing health care, human rights, and justice.

Despite this, there is no national system in place to assess and monitor experiences of stigma among sex workers in Australia. Without these mechanisms, we cannot effectively implement strategies to reduce stigma.

Reducing stigma requires not only legal and policy change but cultural change.

There are obvious first steps: decriminalisation of sex work, anti-discrimination protections, and funding for peer-driven rights-based sex worker organisations. But these steps alone are not enough.

Researching and monitoring the prevalence, manifestations and implications of stigma is crucial to developing strategies to reduce its impact.

The development of national stigma indicators will allow for concrete targets to be set to reduce stigma. This data can be used as a foundation for stigma reduction interventions, such as media audit tools or regulatory guidelines.

Sex workers continue to mobilise, engage and fight against stigma. The hashtags #rightsnotrescue and #facesofprostitution are examples of the diverse human faces behind sex work.

But one of the most insidious consequences of stigma is its ability to curtail the capacity of sex workers to fight for basic human rights.

Both external and internalised stigma impacts the mental health and emotional resilience of sex workers to engage in advocacy, organising and activism. Stigma feels heavy. Stigma is exhausting. Stigma is grieving the death of another community member and friend.

The sheer weight of stigma is an intergenerational burden passed on and held by sex workers. The greatest travesty is that stigma directs sex workers’ energies to the reactive work of responding to sensationalist headlines or political expediency and diverts it from peer education, community building and world-making – the very generative work that allows us to survive and thrive.

Read the rest of the articles in this series here.

The rise and fall of Rentboy.com