Opinion Terrorism on the rise in OECD countries

The urgency for Australia to understand the drivers of terrorism has never been so critical, writes Steve Killelea, Founder and Executive Chairman of the Institute for Economics and Peace. 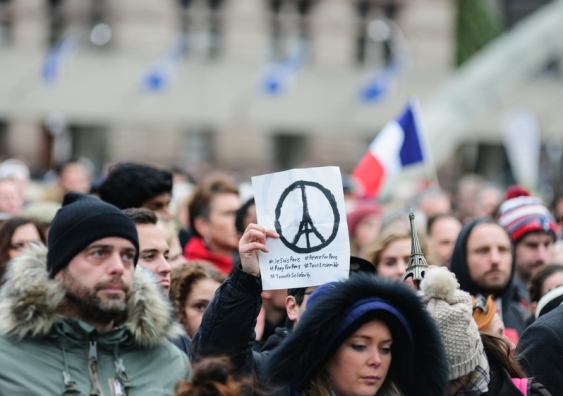 OPINION: Over the past 15 years, terrorism has become an increasing concern for governments, security forces and the wider population. It has affected lives all over the world and has contributed to the global decline in peacefulness experienced over the past decade.

In Australia it can be easy to feel a long way from a troubled world. Once a detached concept discussed primarily by academics and security experts, the threat of terrorism is now happening on home territory. According to research conducted by the Institute for Economics and Peace, the last three years have seen a dramatic increase in the intensity and spread of terrorist incidents in OECD member countries, which include Australia.

Findings from this year’s Global Terrorism Index (GTI) show a complex picture of the changing trends of terrorism. On the one hand, 2015 saw a 10% decrease in the number of deaths caused by terrorism, falling from 32,685 in 2014 to 29,736 in 2015. Additionally, 78 countries improved their scores in the GTI, while only 53 deteriorated. However, more disturbingly, the overall GTI score deteriorated by 6% due to many countries experiencing record levels of terrorism. In fact, OECD countries recorded a 650% increase in death since 2014, rising from 77 to 577. Also, ISIL and its affiliates are now operational in 28 countries, 13 more than last year.

As an OECD country, the urgency for Australia to understand the drivers of terrorism has never been so critical. The streams of Australian recruits fighting for ISIL in Syria reached as many as 240 in mid-2014; stopping the outflow of foreign fighters is a difficult task and requires considerable counter surveillance operations. 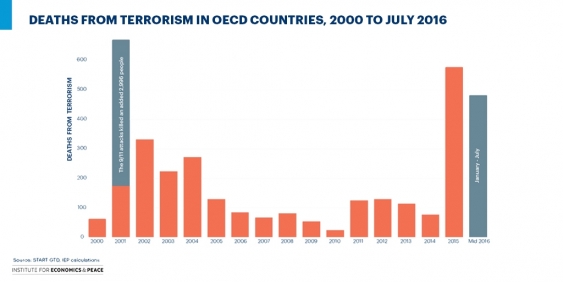 As these numbers continue to rise, so do the numbers of terrorist incidents occurring on Australian soil. The GTI findings reveal that there were more terrorist incidents on Australian soil in 2014-2015 than in the preceding 15 years combined. While experiencing low levels of terrorism by global standards, Australia still finds itself just outside the top 10 rankings of OECD member countries.

Today, terrorism continues to spread its roots; its premeditated and systematic creation of a climate where fear and terror cause political and social unrest are exemplified by the spread of ISIL in 2015. It is important to note, however, that over 99 percent of terrorist attacks occur in countries with ongoing conflict or high levels of state-sponsored terror such as extrajudicial killings, torture and imprisonment without trial.

It is also critical to understand that a different set of factors have been found to be statistically linked to terrorism in OECD countries than in developing countries. In OECD countries factors associated with alienation are more statistically linked with terrorism. These factors include high youth unemployment, high levels of crime, and less belief in the political system, the UN and the media.

The statistical analysis underpinning alienation in the OECD is probably one of the more critical issues of our time. It is characterised by growing levels of inequality, underemployment of both the well-educated and lesser educated and is expressed through the dissatisfaction with the political establishment as seen in the US election, Brexit and the rise of alternative politicians within Australia.

Steve Killelea is the Founder and Executive Chairman of the Institute for Economics and Peace. He will be part of the event 'Unlocking the Global Terrorism Index' at UNSW on Tuesday 22 November.