Opinion Veiled women made to feel fearful on Australian streets

The social stigma around wearing the burqa in Australia means it is as good as banned anyway, writes Zeinab Zein. 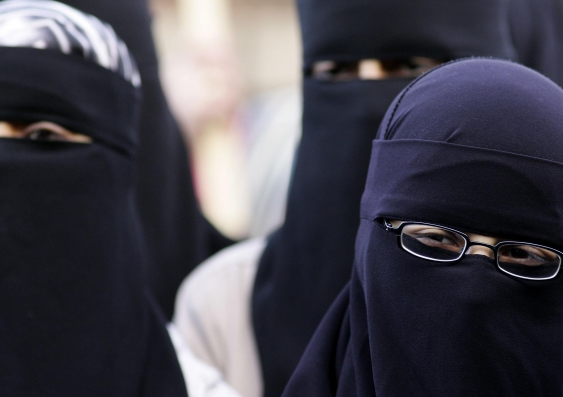 OPINION: There has been a recent rehashing of an old debate about whether Australia should ban Muslim women from observing the Islamic practices of face veiling and even calls for an outright ban on the wearing of the burqa, a head-to-toe covering.

In the aftermath of 9/11, the act of wearing the burqa was publicly declared "un-Australian" by politicians and public commentators such as Fred Nile, Michaelia Cash and Michael Smith. These politicians and public commentators sought to align face-veiling with the oppression of women and national security, based on claims the fabric could be used for hiding weapons and devices that posed a risk to public safety.

Following the counter-terrorism raids earlier this month, Liberal Senator Cory Bernardi and Palmer United Senator Jacqui Lambie made a correlation between the burqa and national security, after footage emerged of women wearing face veils in the houses that were raided.

In the Australian context, the veiling practices of Muslim women have often been perceived as a  threat  to Australian cultural values. The veiled Muslim woman in the political arena is seen not only as culturally incompatible (as shown by Bernardi's comment that the burqa is not right in Australia), but the perceived oppression of Muslim women also supposedly shows the country's vulnerability to Islamic extremism. This means that expressions of Islamic religious identity are often suspected as a sign of fundamentalism and therefore a potential national security threat. Senator Lambie's post on social media of an image of a burqa-clad woman handling a gun attached to prayer beads with the comment the 'burqa must be banned for security reasons" feeds into this idea. This is despite the fact the woman in the picture was a very powerful Afghan policewoman.

Muslim migration to Australia dates back to the middle of the 19th century. Yet still, despite the fact the majority of Muslims are now born in Australia, they are not recognised as possessing the same everyday Australian values of those born into other religions. Empirical evidence suggests that Australian-ness is defined more narrowly; you need to be white and Christian to belong.

A study by the Dean of the School of Social Science at the University of Western Sydney, Kevin Dunn, found this contributes to a strong antipathy towards Muslims. This finding was also echoed by the 2004 Australian Human Rights Commission report  Isma – Listen which documented how women identified as Muslim by the way they dressed, were restricting their movements in public spaces and seeking safety in numbers because of racism. This impacted  on their mundane routines of going to work, school, university and shopping, as well as on the street and while using public transport.

As a sociology student, I conducted a research study into the experiences of burqa-clad Muslim women. The results revealed a widespread sense of personal insecurity and societal disempowerment. Most of the women who participated in the project were born in Australia, they had a tertiary education and among them were nurses, teachers and scientists. All the participants called Australia home but many felt their place within the nation was precarious.

Most women could recount stories of being called a terrorist. Grown women relayed stories of being chased in public spaces by people threatening them with violence if they did not remove their face veils, while others said they had been run off the road while driving. Mothers were often shoved and sworn at in public in front of their children, or stared at nervously in public as if they were about to be accused detonating a bomb. Paradoxically, these experiences made burqa-clad Muslim women feel even more fearful for their own safety in public. In effect, these women live on the edge of mainstream Australian society, which limits what they can and cannot do, and where they can and cannot go. This informal socio-spatial legislation exists outside of formal legal institutions.

Recent inflammatory comments from politicians show there is a projection of socio-cultural anxieties on to Muslim women in this country at the moment. There is a struggle between giving women the autonomy to dress as they choose, yet not giving them the ability to define the dominant narratives about their own identities. Calls for legislative intervention against the burqa have not been successful in the Australian parliament, yet the social stigma around wearing the burqa means it is as good as banned anyway.

Zeinab Zein is a law student at UNSW.