The man known as the most popular professor in the world had some challenges for UNSW audiences. 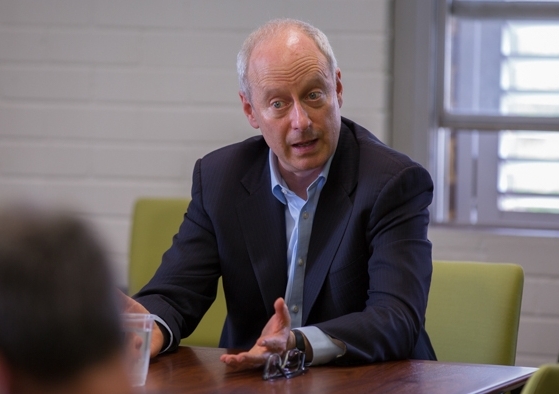 UNSW Sydney students and audiences were challenged to consider the moral implications of the world’s refugee crisis, and other complex ethical issues, during a visit by Harvard University political philosopher Professor Michael Sandel.

Professor Sandel explores some of the most hotly contested moral and political issues of our time. He has been described as “the most popular professor in the world” (Die Zeit), “the most relevant living philosopher” and a “rock star moralist” (Newsweek).

“What’s become of the truth” was the topic of the weekend and Professor Sandel triggered a lively discussion on Friday with students from the Faculty of Arts & Social Sciences about how Australia’s response to migrants compared with other countries.

He continued to engage audiences at a special event at Carriageworks on Saturday for UNSW’s new Centre for Ideas, before taping a rare solo appearance on Sunday for the ABC TV’s Q&A program, to be broadcast tonight at 9.35pm AEDT. On Q&A he will be preceded by Bill Gates, who was interviewed in a special Q&A program on global health and development hosted by UNSW in 2013.

During filming for Q&A, the ABC studio was packed with an audience that included students and members of the University community. During tonight’s program host Tony Jones and Professor Sandel will discuss topical issues including the Trump presidency, populism and threats to democracy.

At the one-off Centre for Ideas event, Professor Sandel put truth under the knife, working through a series of problems in conversation with an attentive audience. Discussion ranged from weapons of mass destruction and privacy breaches, to philosopher Harry Frankfurt’s definition of “bullshit”.

A theme in all Professor Sandel’s talks during his visit was the importance of creating opportunities for citizens to reason together about complex and difficult issues.

Professor Sandel’s popular course “Justice” was the first Harvard course to be made freely available online and on television. It has been viewed by tens of millions of people around the world, including in China, where he was named the “most influential foreign figure of the year” (China Newsweek).

He has been a visiting professor at the Sorbonne, delivered the Tanner Lectures on Human Values at Oxford, and given the Kellogg Lecture on Jurisprudence at the US Library of Congress. He received his doctorate from Oxford University, where he was a Rhodes Scholar, and is a member of the American Academy of Arts and Sciences.

Professor Sandel's lecture tours have taken him across five continents and packed such venues as the Sydney Opera House, St. Paul’s Cathedral (London) and an outdoor stadium in Seoul (S. Korea).