The Safety, Sexual Harassment and Assault at Australian Music Festivals report is the first national study to investigate sexual violence at music festivals. 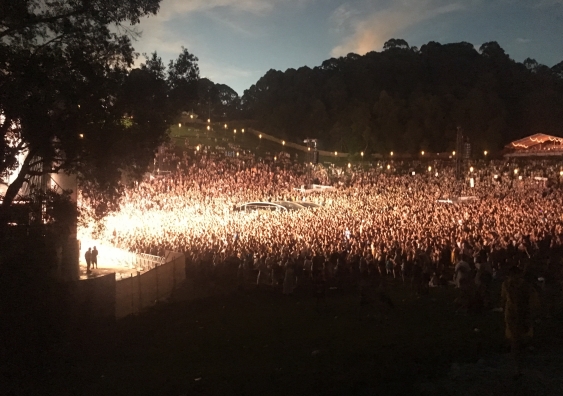 The Safety, Sexual Harassment and Assault at Australian Music Festivals report is the first Australian – and one of the only international studies – to investigate sexual violence at music festivals. The University of Melbourne and Western Sydney University contributed to the report.

“Music festivals have a unique combination of spatial, social and cultural features that make them more conducive to sexual violence,” UNSW Senior Lecturer in Criminology, Dr Phillip Wadds said.  “For one, many are made up of predominantly young people who we know are far more likely to experience sexual violence across greater society. They are also often in large sprawling spaces with large crowds, but limited surveillance, particularly at night, and these elements can combine to create opportunities for perpetrators. Layered into this are high levels of intoxication, a generally masculine culture of transgression and carnival that again can encourage (largely) men to engage in harassing or assaultive behaviour.”

The report comes as a NSW coronial inquest is looking at the drug-related deaths of six people at music festivals between December 2017 and January 2019.

The research involved a survey of 500 patrons of the 2017/18 Falls Festival, on-site observations, and interviews with victim-survivors of sexual violence at any Australian festival. The vast majority (61.5%) of survey participants said they usually felt safe at music festivals, but a strong majority also indicated that they believed physical violence (92.8%), sexual harassment (95.1%) and sexual assault (88.6%) occured at music festivals.

“While survey participants indicated that they would be extremely likely to report sexual assault (75.2%) and sexual harassment (62%), this did not reflect the actions of participants who had directly experienced these forms of violence,” Dr Wadds said. “Most participants did not report to police, security or festival staff. Those who did report typically recalled negative responses from authority figures, such as victim blaming, not taking the report seriously, and/or a failure to take appropriate action.”

The research found that almost all participants (99%) consumed alcohol at music festivals, with most at ‘high-risk’ levels. Just under half of the participants (47.8%) consumed drugs. This high-level consumption of alcohol and other drugs was reported by victim-survivors of sexual violence to be a key feature of their experiences, with many perpetrators using their own intoxication to excuse their behaviour. Victims intoxication was also cited as a reason why they didn’t report.

“Unfortunately, many of the victim-survivors we spoke to said they were often taken less seriously by friends, security or police if they were intoxicated when reporting an experience of sexual violence,” Dr Wadds said. “In fact, many didn’t report at all because they felt partially responsible for their own victimisation, or didn’t want to ‘get in trouble’ from a police force which takes a hard line against drugs at festivals.”

Participants highlighted the mosh-pit and other crowded spaces as some of the key sites where they had been groped or received unwanted sexual attention. Perpetrators of sexual violence were overwhelmingly men, victims were mainly women, and bystanders rarely intervened when sexual violence was occurring.

“It’s often really difficult to differentiate between consensual or non-consensual sexual interaction in settings where there are lots of people hooking up,” Dr Wadds said. “Places like the mosh pit also feature lots of incidental physical contact, and so that can often be used as an excuse when someone experiences unwanted sexual contact. People were generally wary of intervening in situations because they weren’t sure how their intervention might play out. There can be high costs if they get it wrong, so a lot of people said they would only intervene in the most obvious of cases.”

The research provides a series of recommendations to combat sexual violence at festival events. “Addressing sexual violence at festivals requires all parties to be part of the solution and so we have recommended a series of practical steps that festivals, service providers and patrons can take to try and address some of the issues that emerged from our research,” Dr Wadds said. “Firstly, festival organisers and promoters need to set really clear and consistent standards of behaviour for their events, and they need to back these up. If people sexually harass or assault others, patrons need to know that there will be serious consequences, and victims need to know that their reports will be taken seriously and dealt with, with appropriate sensitivity.”

Staff and security training in appropriate ways to deal with reports of sexual harassment and assault was also recommended, alongside improvements to levels of surveillance, signage, lighting and greater access to safe spaces and counselling services.

Dr Wadds said patrons also needed to actively be part of the solution. “At the end of the day, everyone working at and attending a festival needs to be part of producing an environment that is safer. We need to build an ethic of care into festivals and start to break down the more problematic aspects of culture that facilitate, excuse or actively promote sexual violence. A lot of this responsibility falls to men in the space, as the primary perpetrators of this violence.”

The researchers have recommended further nationwide research across a broader spectrum of festival types. “We are planning the next phase of this project now which will hopefully build a more complete national picture of the diverse experiences people are having at festivals and help us improve the evidence base on which good policy can be developed.”

For more on the findings and recommendations, read the report.