Five outstanding UNSW students are preparing to live and study in Asia after being named 2017 New Colombo Plan Scholars. 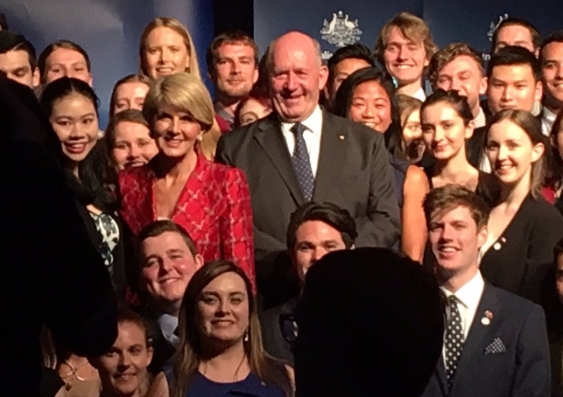 Five outstanding UNSW students are preparing to live and study in Asia after being named 2017 New Colombo Plan Scholars.

The five UNSW students were among 105 of Australia’s best and brightest undergraduate students to receive the NCP's most prestigious grants at a function in Canberra last night.

Foreign Minister Julie Bishop said in a statement the New Colombo Plan scholars would study in 17 Indo-Pacific locations next year, “including Pakistan and Papua New Guinea for the first time. This reflects the continued strong demand for diverse study opportunities in our region”, she said.

Daniel Tam, from UNSW Engineering, will head to China in second semester to further his studies in photovoltaics and solar energy engineering.

Law student Melissa Vogt will take up her place at Japan’s Chuo University in first semester, followed by a further six months of internships and mentoring.

The NCP aims to lift knowledge of the Indo-Pacific region by supporting Australian undergraduates to study overseas and undertake internships. NCP students gain valuable new skills and understanding that they will bring to their future workplaces, supporting Australia’s future competitiveness and economic growth.

The scholarships include language training tuition, a travel allowance, an establishment allowance, a monthly stipend, health and travel insurance and a dedicated case manager.

Vogt, who was the top-ranked scholar for travel to Japan, said it was exciting to be selected for the prestigious program. She would take the opportunity to study a number of courses focusing on comparative corporate law as well as developing her Japanese language skills.

“I’ve been interested in studying in Japan for a number of years. The New Colombo Plan gives me the opportunity to not only study for a semester, but also to be involved in internships and mentoring programs in the corporate sector and government for a further six months.

“Economically speaking, Japan is an incredibly important country for Australia. I have worked on a series of cases where Japanese companies have experienced difficulty adapting to Australian competition law, so I am interested in building more cooperative relationships and shared knowledge among corporations, which in turn can facilitate trade between countries in the region,” she said.

“I’d encourage any student to apply for the program next year. It’s an amazing opportunity and so much more than just an exchange to Asia."

I've always wondered: why many people in Asian countries wear masks, and whether they work