Engineering student Alex Green can now add ‘Paralympic medallist’ to her long list of achievements, after winning bronze in cycling at the London games. 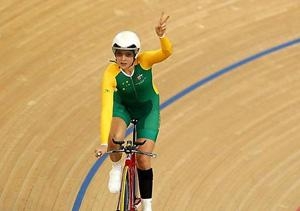 Alex Green can now add ‘Paralympic medallist’ to her long list of achievements, after winning bronze in cycling at the London games.

It was a fantastic start to Green’s Paralympic debut, riding a new personal best to win her medal on the first day of competition.

Green also raced in the 500m time trial, beating her personal best by more than a second and placing eighth overall. She had a better result in the Road Individual Time Trial event, finishing fourth.

Green has been keeping her fans up-to-date with her Paralympic journey via her blog, regularly posting photos of her events and training sessions.

A talented athlete, Green switched to cycling in 2010, after much success in competitive rowing. In 2009, she was named UNSW Female Athlete of the Year.

“It felt great to fight for that bronze medal. My success at these Games is already driving me towards Rio in 2016,” she told the Southern Courier from London.

“Standing on that podium having 6000 people cheer is absolutely amazing. What an incredible thing it was to have experienced, I shall never forget it.”