Masters degree opens up a new world and community

UNSW Master of Policy Studies graduate Su Pon Chit is putting her new knowledge into practice, advocating for people with a disability and promoting change in Myanmar. 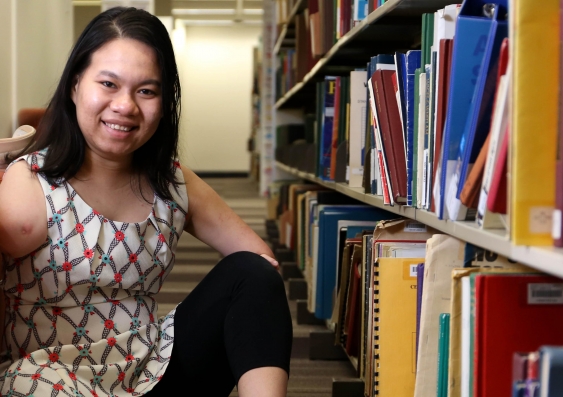 Su Pon Chit ... "UNSW is the window that opened up a new world and community for me." Photo: Grant Turner/MediaKoo

Su Pon Chit has been challenging perceptions and advocating for change from a young age.

Born in Nyaungdon Township in Myanmar with physical disabilities including no arms and limited use of her legs, the 24-year-old UNSW Master of Policy Studies graduate is now putting her new knowledge into practice in her home country, advocating for people with a disability and promoting change.

“Myanmar is a poor, developing country and the government can't support facilities for people with disabilities. There are many challenges, both physically and mentally,” Su Pon says.

Less than 10 per cent of people with a disability in Myanmar attend school or have access to healthcare, and women face particular discrimination. However, this did not stop Su Pon from setting high goals.

“Originally, I really wanted to be a doctor because my father is a veterinary surgeon and he had many friends who were medical doctors,” she says.

Su Pon says her admiration for Myanmar’s opposition leader, Aung San Suu Kyi, was one of the reasons she chose the Master of Policy Studies.

“I realised that if I want to change or establish policy or legalisation for people with disabilities, or around education, I had to know about policy processes,” she says.

Su Pon finished high school in 2005 but the physical requirements of studying medicine meant she had to give up her dream of becoming a doctor. Instead she studied a Bachelor of Engineering in Information Technology.

Following completion of her degree, she received a prestigious Australia Award Scholarship from the Australian Government to undertake postgraduate study at UNSW.  The scholarships are awarded based on the recipient’s academic ability and potential to implement change in their home country.

“UNSW is the window that opened up a new world and community for me,” Su Pon says.

She was assisted in her transition to study in Australia by UNSW’s Student Equity and Disabilities Unit (SEDAU) as well as the Myanmar Student Society who warmly welcomed her to life at UNSW.

“SEADU was the best place for sharing information about disability and the staff were really helpful. In my country, there is no special unit like SEADU in either universities or schools,” she says.

After graduating in July, Su Pon returned to Myanmar with big plans.

“If I have the chance to lead disability policy in Myanmar, I would like to establish a special unit in every school and university,” she says.

Disability and a good life – what does it take?