Ashleigh Webb’s family is no stranger to sporting success – the Taekwondo champion and Ben Lexcen scholarship winner is the daughter of one of UNSW’s first sports scholars. 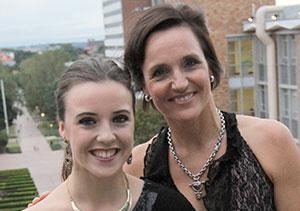 Ashleigh Webb’s family is no stranger to sporting success – the martial arts champion and recipient of a Ben Lexcen Sports Scholarship is the daughter of one of UNSW’s very first sports scholars.

The Australian Junior Taekwondo Champion is taking after her mother, Melanie Webb, a former Olympic windsurfer and one of the first recipients of the Ben Lexcen Scholarship in the late 1980s.

Ashleigh, who is a first-year Arts/Law student, says she was doubly proud to receive the honour due to its significance in her family and the advantages it will provide her with.

“My mum was in the second class of Ben Lexcen scholars, and here I am receiving the same one some 20 years later, so it’s a big milestone,” she said.

The $5,000 scholarship will allow Ashleigh to devote her time to training and completing her degree without the distraction of a part-time job. She will also take part in a mentoring program to assist her in managing her sport and study commitments.

“It will be a huge help to me, particularly because I often train for five days of the week,” she says.

While winning her junior title has been a highlight, Ashleigh has her sights set on competing in and winning the upcoming open division competition.

“It will be a big step up from my previous accomplishments,” she said.

UNSW Vice-Chancellor Professor Fred Hilmer presented this year’s 19 Ben Lexcen Scholars with their awards and commended them on their dedication to sport.

“The Ben Lexcen ideal is important to recognise – that the harsh lessons in the pursuit of sporting excellence can build civic minded leaders,” Professor Hilmer said.

The Ben Lexcen Scholarship is awarded to students who show exceptional talent at the national or international level in any sport. This year’s winners are competing in a diverse range of sports including sailing, skiing, water polo and AFL.

UNSW was the first Australian university to establish a program of sports scholarships in 1988 and now provides more than $100,000 in support to talented student athletes, largely made possible through generous donations.