'Possibly the best year ever for UNSW sport' was how MC Andrew Jones, CEO of Cricket NSW, described 2016 at the Blues and Sports Awards last week. 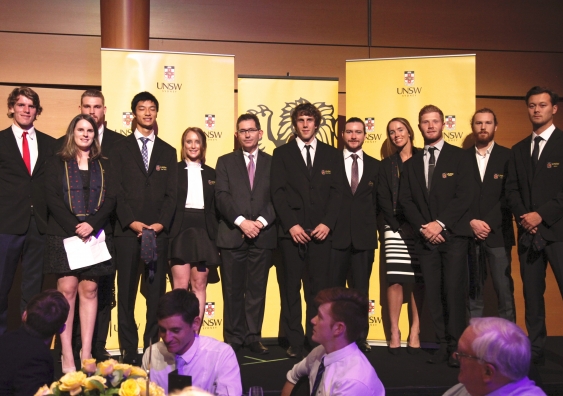 “Possibly the best year ever results wise for UNSW sport” was how MC Andrew Jones, CEO of Cricket NSW and a UNSW alumnus, described 2016 at the UNSW Blues and Sports Awards held last week.

The evening included the launch of the UNSW 2025 sports strategy and the announcement of Rugby Sevens star Henry Hutchison and Australian cricketer Georgia Redmayne as UNSW’s athletes of the year.

Hutchison joined the International Rugby Sevens in 2015, his first year at UNSW. In 2016 he was selected in the Australian Sevens team for the Rio Olympics, and was also awarded the prestigious IRB Rugby Sevens Rookie of the year award.

It’s been an incredible year for UNSW sport. Sport is right at the heart of our community and our strategy.

Redmayne was top scorer in the Sydney Women’s Cricket competition and has won player of the year two years running. A member of the NSW Breakers squad and later the Hobart Hurricanes, Redmayne is currently touring Sri Lanka with the Australian Development team.

“We had 12 competitors in the Olympic and Paralympic games, some great club successes, winners of the Eastern University Games and Snow Sports, both for the first time, and we had representatives at the World University Games.

“Sport is right at the heart of our community and our strategy,” Professor Jacobs said.

Neil Morris, UNSW Vice-President, Campus Life and Community Engagement, presented an overview of the new 2025 sports strategy and said the aim was: “To deliver the best and most inclusive university sports experience in Australia through exceptional high performance participation sports programs and facilities.”

The evening also included the awarding of Blues – the University’s highest sporting honour. Blues awards were first presented at UNSW in 1955.

“They combine high university sporting achievement, commitment to their club and demonstrate the key sporting values of teamwork and selflessness across the whole of their university life.”

The event also celebrated the awarding of UNSW’s most prestigious sports scholarships – the Ben Lexcen Sports Scholarships.  Jon Paparsenos, Vice President Philanthropy, presented the seven new scholarships awarded in 2017 and thanked all the donors to the program for their support.