Opinion The F-35 JSF: what is a fifth-generation fighter aircraft?

The term 'fifth-generation' is not so useful when trying to analyse how well suited the Joint Strike Fighter is to Australia’s strategic needs, writes Steven Jones. 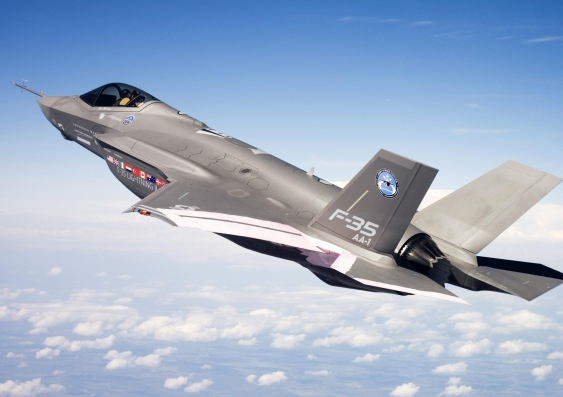 Both the Prime Minister Tony Abbott and Defence Minister David Johnston spoke of the JSF’s “fifth-generation” capability as Australia now plans to buy a further 58 aircraft.

The political mantra of the importance of a fifth-generation aircraft begs the question: What does it mean?

Is there a definition?

Despite its common usage, the definition of fifth-generation is not clear and is contested but it can serve a political purpose as defence writer Giovanni de Briganti pointed out:

Politicians know next to nothing about defense, so being able to pepper their sentences with expressions like “the only fifth-generation aircraft” gives them instant credibility in the eyes of the trusting public, and leaves other politicos with no come-backs, especially if it is followed up with references to the moral obligation of “buying the best equipment for our military".

One report says Lockheed Martin labelled the F-35 a “fifth-generation” fighter in 2005, borrowing the Russian term to describe the F-22 Raptor. Previously, and even up to 2009, the JSF was referred to as a new or next-generation aircraft.

As well as a political tool the term fifth-generation is also a powerful marketing tool, at least according to critics such as representatives from Eurofighter whose Typhoon fighter has lost many procurement battles with the JSF.

The marketing argument is implicitly supported by the Office of the Auditor General of Canada, who used a critical definition of fifth generation aircraft:

Fighter jets that, according to manufacturers, incorporate the most modern technologies, such as stealth, advanced radar, and integrated avionics. There is no accepted or objective definition of fifth-generation capability.

Generally, fourth-generation aircraft are those developed in the 1970s and 1980s, with more advanced radars and avionics (aerospace electronics), including fly-by-wire (computer interfaced) controls, improved manoeuvrability, and multi-role capabilities.

The US FY2010 Defense Authorization Act defined 4.5 generation as current aircraft, including the F-15, F-16 and F/A-18, that have advanced capabilities, including active electronically scanned array radar, high capacity data-links and enhanced avionics, and have the ability to deploy current and reasonably foreseeable advanced armaments.

To examine the concept of fifth-generation aircraft, the definition provided by the US Congressional Research Service is useful, although it lacks precision:

Many fourth-generation aircraft have some of these features but it is generally considered that for an aircraft to truly be fifth-generation it must include all of these characteristics.

For example, the American B-2 Spirit strategic bomber and F-117 Nighthawk strike fighter are both stealth aircraft but they are not fifth-generation aircraft as they lack advanced radars and other avionics.

Some reports say the JSF is “not technically a supercruising aircraft” but it can “maintain Mach 1.2 for a dash of 150 miles without using fuel-gulping afterburners”.

Only the short take-off and vertical landing version of the aircraft (the F-35B, which Australia is not acquiring) will have thrust vectoring, which can greatly improve manoeuvrability for dogfighting.

The JSF is less manoeuvrable than some fourth-generation aircraft, particularly the Russian Sukhoi fighters, but this deficiency is negated through stealth.

Stealth allows a pilot to shoot at another aircraft without the enemy having the ability to shoot back because they cannot see them. To make definitions even more complex, stealth is not an absolute term as it too can be contested.

Stealth refers to the inability of the enemy to detect the aircraft, commonly by radar. The smaller the radar cross section of an aircraft, the more difficult it is to detect and the more stealthy it is considered to be.

This level of radar stealthiness is determined by the outside of the aircraft, the design of the body and what it is made of or covered with.

All modern combat aircraft are designed with a low radar cross section in mind and for this reason competitors of the JSF describe their aircraft as stealthy but they are not as stealthy as the JSF.

The F-22 Raptor is probably the only operational aircraft stealthier than the JSF. But the radar cross section of the JSF is at its lowest when directly facing a radar. It then increases as the aircraft turns away from the radar presenting more of its side rather than front.

Internal weapons bays ensure stealth is not compromised when carrying weapons internally but it would be comprised when the JSF carries weapons on its wings.

The US has kept the details of the electronic weapon capabilities a closely guarded secret but there is a question as why Australia is investing in Boeing EA-18G Growler which is 4.5-generation electronic warfare aircraft with the JSF soon to enter Australian service.

Look around for the enemy

The JSF will provide parallelled situation awareness, allowing the pilot to virtually “look through the floor of the fighter or behind the aircraft”. Networking will also allow the pilot to see information provided by other aircraft, ships or ground units.

The JSF has an electro-optical distributed aperture system which, when coupled with the advanced helmet, provides the pilot with 360 degree spherical situational awareness.

As well as collecting information from onboard and remote sources – and fusing it gives the pilot broad battlespace awareness – the JSF can automatically collect vast amounts of data on enemy forces, including targeting information, and transmit it to other friendly forces in the air and on the ground.

Is it the next generation?

So using the term fifth-generation offers the benefits of simplicity and authority where the characteristics of modern combat aircraft are broad ranging and complex.

But it is not a useful term when trying to analyse how well suited the JSF is to Australia’s strategic needs. The term denotes an improvement over older technology, inferring improved capability, but does not describe the technology’s usefulness in strategic environments, or cost effectiveness.

An effective public debate is made difficult when a catch-all slogan is commonly used, but where a technically informed analysis is needed.

Steven L. Jones is a PhD candidate at UNSW Canberra. His thesis is examining Australia's procurement of the Joint Strike Fighter.