UNSW’s innovation culture has been boosted with the appointments of entrepreneurs Mike Cannon-Brookes and Ori Allon, who will advise on developing student start-ups. 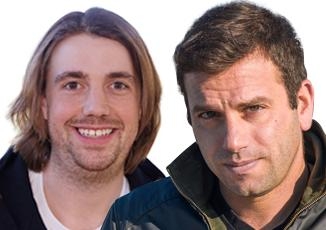 Two of Australia's most successful technology entrepreneurs, Mike Cannon-Brookes and Dr Ori Allon, have been appointed Adjunct Professors at UNSW’s School of Computer Science and Engineering.

The appointments, initially for three years, will see Cannon-Brookes and Allon advise the School on ways to encourage students to explore and act on their start-up ideas.

The entrepreneurs will also provide advice on how these ideas can be incubated.

Cannon-Brookes is one of UNSW's most high-profile graduates (Information Systems ‘02). He is co-founder and co-CEO of software company Atlassian with fellow UNSW graduate Scott Farquhar (Business Information Technology '03).

The fast growing company – which employs a number of UNSW graduates – is estimated to be worth $3.5 billion. Last year, Cannon-Brookes and Farquhar became the first technology entrepreneurs to be ranked No. 1 on the BRW Young Rich list.

New York-based Dr Allon graduated with a PhD from the Faculty of Engineering in 2009.

Dr Allon is best known for selling technology he created to Google and Twitter, and is now Founder and Executive Chairman of Urban Compass, a technology company that empowers people to collaborate on a home search “in a way that is not only smart but also enjoyable”.

UNSW has become a magnet for innovators, producing more successful start-up entrepreneurs in the past 15 years than any other Australian university, according to an analysis of research by CrunchBase.

The School of Computer Science and Engineering is home to a Venture Space for students and recent graduates, and is presently exploring further initiatives to build on the existing culture of innovation.

Head of School, Associate Professor Maurice Pagnucco, says the Adjunct Professor appointments are “a coup for the continuing development of start-up programs within the School”.

“Over the past couple of years we've been exploring more opportunities for our students – we really want to foster this innovation culture. It's becoming much more important to society," Pagnucco says.