Australians trust robots more than do the Japanese, rating the androids higher for likeability and intelligence, research by UNSW's Creative Robotics Lab has found. 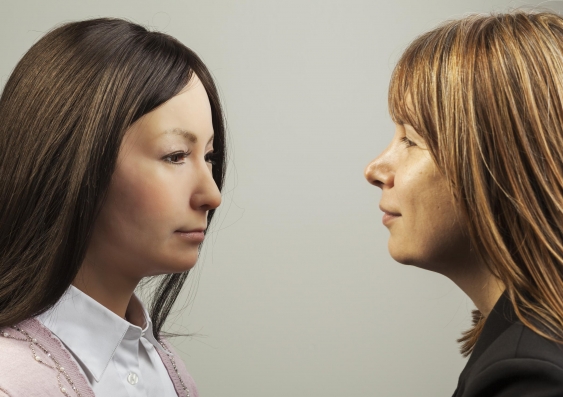 Undertaken by CRL director, Associate Professor Mari Velonaki, and UNSW’s Dr David Silvera-Tawil, the research will be presented at the Sixth International Conference on Social Robotics in Sydney today.

"Our research aimed to measure and compare human trust, perception and attitudes towards an android robot in two different countries," said Professor Velonaki, who was voted one of the world’s top 25 women to watch in the field of robotics in 2014 by Robohub.

A total of 111 participants in Sydney and Tokyo took part in the study which involved human interaction with Geminoid-F, an android robot resembling a young Japanese woman.

The experiments involved Geminoid-F asking each participant to move a box from one position to another and touch its hand. Participants were also asked to move a chair closer to the robot and ask it open-ended questions.

When analysing the participants' openness during interaction, it was observed that Australian participants were generally more open to the experience and asked the robot several more questions than the Japanese participants.

"Australian participants often focused on the robot's choices, for example Geminoid-F’s favourite colour, what she dreams about and her ‘feelings’ about being a robot," said Dr Silvera-Tawil.

Participants rated Geminoid-F on a number of factors including:

• Likeability – Australian participants liked the robot significantly more than Japanese participants, both before and after interaction.

"The overall increase in perceived safety for both cultures is a response to the realisation that even though the robot looks human, it is not capable of creating any damage," said Professor Velonaki.

Overall, the findings contradict the stereotype of Western cultures rejecting robots and the Japanese accepting them.

"Understanding how people perceive robots, and the differences that might exist between different cultures, will play a significant role in the creation of future robots for human-robot interaction," said Dr Silvera-Tawil.

The CRL was recently awarded an Australia-Japan Foundation grant to research social human-robot interaction from the perspectives of Australian and Japanese society. The experiments, to take place at the CRL and the Watanabe and Matsumoto Labs, will result in a major bilingual publication.

The CRL is located within the National Institute of Experimental Arts at UNSW Art & Design.