The internationally renowned UNSW Scientia Professor is recognised for creating the field of atomic electronics. 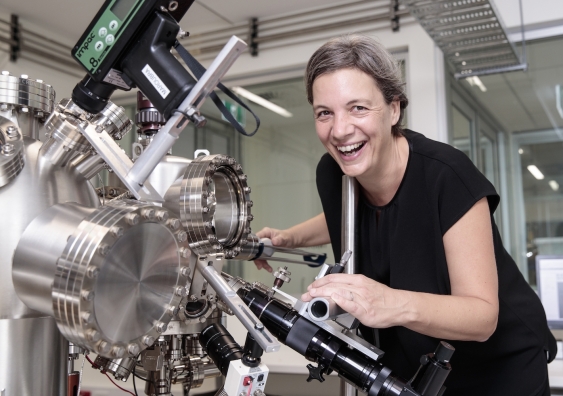 The Royal Society of London has awarded Scientia Professor Michelle Simmons the prestigious Bakerian Lecture, which was first delivered in 1775. Photo: UNSW.

Scientia Professor Michelle Simmons AO at UNSW Science has been awarded the 2021 Bakerian Medal and Lecture, the premier lecture in physical sciences, by the Royal Society of London. The honour is in recognition of her “seminal contributions to our understanding of nature at the atomic-scale by creating a sequence of world-first quantum electronic devices in which individual atoms control device behaviour”.

Professor Simmons says few things have given her greater pleasure than hearing she was awarded the Bakerian Medal and that she will give the Bakerian Lecture.

“The Bakerian Medal means a great deal to me. The previous winners have been some truly inspirational individuals,” she says.

“I was told the great news on my birthday, and one of my personal heroes, Michael Faraday, was an early recipient. Physics is, if nothing else, an empirical science and I am really looking forward to sharing some of the exciting work that’s currently happening in our laboratories.”

Professor Simmons says it isn’t always easy being a scientist.

“We all have our failings and prejudices. Even with the most careful adherence to the scientific method, it’s difficult to see the world as it truly is. One has to be systematic and observant of the details. This takes a certain amount of bloody-mindedness and grit.

“For those of us who choose to make a career out of doing this, it’s uplifting to be reminded that one is part of a chain of fellow enquirers all seeking to understand the world as it really is.”

“Michelle is internationally renowned for creating the field of atomic electronics, pioneering new technologies to build computing devices in silicon at the atomic scale. Her team is at the forefront of a global race to develop a quantum computer in silicon.

“She is not only one of the very few researchers lauded with Fellowship of the Royal Society, she has now been awarded its prestigious lectureship, first delivered in 1775. This etches her name among the global greats of physical science.”

“We are immensely proud of our quantum computing researchers and Professor Simmons represents an exemplar of this extraordinary team. In her research, she has pioneered technology to construct computing hardware at an unprecedented scale, out of individual atoms.

“Her goal of realising a practical quantum computer is the next frontier in semiconductor physics and is likely to transform computing in the 21st century just as the classical transistor did in the 20th century.”

Professor Simmons is the founder of Australia’s first quantum computing company, Silicon Quantum Computing. She is also Director of the Australian Research Council Centre of Excellence for Quantum Computation and Communication Technology (CQC2T) at UNSW Sydney.

She has been recognised by the American Computer Museum as a pioneer in quantum computing, awarded the US Feynman Prize in Nanotechnology and was named the 2017 L’ORÉAL-UNESCO Asia-Pacific Laureate in the Physical Sciences. In 2018, Professor Simmons was named Australian of the Year and was admitted as a Fellow to the Royal Society of London. She was the inaugural Editor-in-Chief of Nature Quantum Information and is currently Chair of the American Physical Society Division of Quantum Information.

“I have spent the last two decades at UNSW where I have developed a large team and been given the freedom to take risks. Here I have really come to appreciate the human side of undertaking research and the importance of building specialised teams with diverse expertise. I am very proud of all my team members past and present and delight in watching what they go on to achieve.”

The Royal Society’s Bakerian lectureship was established through a bequest by Henry Baker FRS (PDF) and began in 1775. The silver gilt medal is awarded annually and is accompanied by a gift of £10,000.