Opinion How COVID health advice and modelling has been opaque, slow to change and politicised in Australia

The Australian people will be best served by separating science from politics. 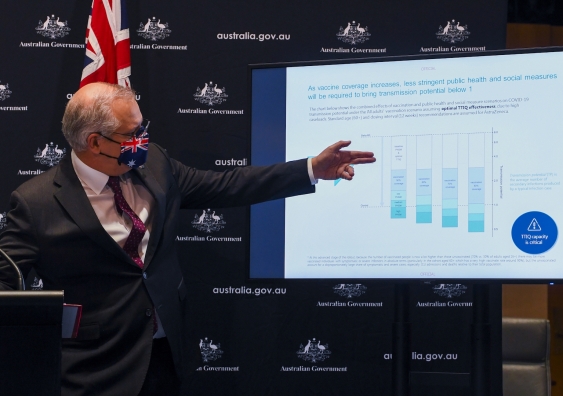 In a recent article, The Australian’s health reporter asked: “Has any modelling put forward by scientific institutes throughout the pandemic ever proved accurate?”

It’s a good question but the answer lies in understanding the truth about modelling — it cannot predict the future.

Rather, it’s a process that identifies variables most likely to shape the course of, say, a pandemic and to quantify their impacts over time.

Politicians commission modellers to assess the present state of things then consider what might happen if various policy settings were to be adjusted.

By providing assessments of the costs, benefits and impacts of proposed policies, good modelling provides governments with a firm foundation for deciding which policies will have what effects.

This week, federal Treasurer Josh Frydenberg claimed his decision to scrap COVID support payments at 80% double-dosed vaccination coverage accorded with the National Plan as informed by the Doherty Institute modelling.

But in neither the plan nor the modelling is any connection drawn between ending support payments at any level of vaccination coverage.

Nor was any modelling apparently commissioned on the likely impact of removing financial support for the most vulnerable when infection rates are high – as in Sydney – and rising alarmingly as in Melbourne.

The power of ‘health advice’

Since the beginning of the COVID pandemic, politicians have justified the many difficult decisions they’ve had to make as being based on “health advice”.

As it should be, “health advice” provided to politicians by chief health officers is informed by modelling commissioned from a range of well-respected and credentialed scientific research institutes.

They are more likely to accept policies buttressed by modelling and health advice than not.

In a pandemic, political decisions have human and economic impacts that are irrevocable, significant and for many a matter of life and death.

Even more reason, therefore, for the scientific integrity of modelling that informs those decisions to be beyond reproach.

The brief given to the modellers is critically important in setting parameters and assumptions and selecting the variables that will be assessed and measured.

The key to building public trust in modelling is full transparency.

But in Australia, these briefs and processes are often shrouded and opaque. Secrecy and a lack of transparency have greatly affected the quality of Australia’s response to COVID.

At the beginning of the pandemic, the federal government’s Emergency Response Plan for Novel Coronavirus did not canvass the cessation of international travel and closure of borders, domestic lockdowns and the use of masks as possible or desirable responses to the pandemic.

Yet within weeks of this advice being published, the modelling had been overtaken by events.

Travel from some but not all countries was stopped, international and domestic borders closed from late March 2020, and lockdowns were implemented across Australia.

In the initial planning and options, lockdowns, cessation of travel and masks were not among the assumptions. The entire response was based on a paradigm of influenza rather than the facts of coronavirus and the need for rapid, preventive responses.

The assumptions informing the initial modelling should have been published, interrogated and debated before, and not after, the initial and ineffectual policy settings were adopted.

Read more: Australia's COVID plan was designed before we knew how Delta would hit us. We need more flexibility

Over the course of the pandemic, the assumptions of modelling commissioned by governments should have been published, scrutinised and debated before, not after, the modelling was undertaken.

Modelling ought to have been commissioned from a range of Australia’s excellent scientific institutions.

Open debate might have meant aerosol transmission of first Alpha and then Delta would have been factored into projections and policy-making about the efficacy of hotel quarantine and border protection far earlier than it was.

This unnecessary addiction to secrecy has eroded the trust and confidence that should exist between governments and the people.

Politics and science each have their separate and distinct roles to play in the managing the pandemic and reducing to the lowest possible levels the damage it causes to lives and livelihoods.

In the response to HIV/AIDS, the politicians of the day ensured scientific advice was provided independently of governments and published as it became available.

The advice became the foundation of the political decision-making process.

Now, as then, Australians expect a similar standard of open and independent scientific advice, information and assessment about the present and likely impact of the pandemic.

Whether commissioned by governments or acting independently, Australia’s pandemic modellers have lived up to their responsibilities to science and the Australian people.

They have applied their expertise to quantifying COVID and the costs and benefits of policy options.

But the critical decisions on assumptions, debate, contestability and transparency are made by politicians, not modellers.

As much as some politicians may wish to deny it, they alone are responsible and accountable to the Australian people for the decisions that have created Australia’s COVID response and will shape its future.

Modelling is integral to building the most robust, sustainable and well-supported response to the increasingly complex challenges of the pandemic.

The Australian people will be best served by separating science from politics.