To look inside a stalagmite is to look back in time tens of thousands of years to see how the Earth’s climate patterns have shaped the world we live in today. 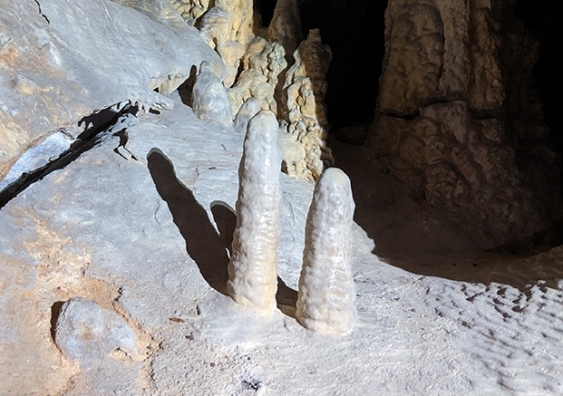 Stalagmites on average have grown one metre over the last 11,000 years. These two are in Yonderup Cave, Yanchep, Western Australia. Photo: Andy Baker/UNSW

Like tree rings, cave stalagmites are a portal to a prehistoric Earth, and now scientists from UNSW Sydney have found they are consistently reliable as time trackers the world over.

In a global investigation into the growth properties of stalagmites distributed across the world, the scientists found that while growth fluctuations due to climate events are evident in the shorter period, stalagmite growth over the longer periods – tens of thousands of years – are surprisingly linear.

“Our new global analysis shows that we can consider stalagmite growth as being like a metronome and very constant over hundreds and thousands of years,” says Professor Andy Baker, UNSW School of Biological, Earth and Environmental Sciences.

“Sometimes extreme weather events can disturb this metronome for a few years, making the growth a bit faster or slower, and we can use that to explore climate variations.

“But in general, stalagmite growth is predictable and it is this unique property that makes them so valuable to researchers – you can tell the time in the past by using the very regular growth rings that are widely present across the globe.”

Stalagmites, which grow from cave floors as water drips from stalactites at the cave ceiling, are the result of chemicals carried by the water in solution that turns to solid form in the cave. They are built by layers of calcite crystals, which may be perfectly stacked one on top of the other if nothing disturbs the growth.

“But in reality, there are many disturbances in caves,” says Prof. Baker.

“Tiny particles from the soil above and trace elements of chemicals can disturb the stacking to create pores between growing crystals or even slightly change their shape in the morphology – or fabric – of the growing crystals.” 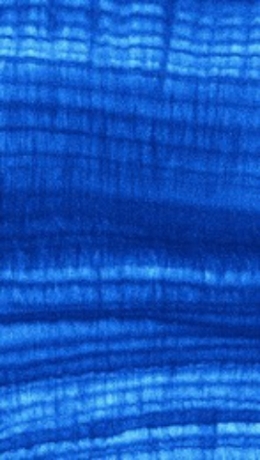 An X‐ray fluorescence map of a cross section of a stalagmite from the Cook Islands. Each dark blue band marks the onset of the wet season. Image: Andrea Borsato, Silvia Frisia/Australian Synchrotron, Victoria

“Before this analysis, we did not have evidence that stalagmites are only found in regions with seasonal precipitation, nor was it obvious that the stalagmite growth rate is relatively unchanging over time and that this is a ubiquitous property,” Prof. Baker says.

“What we have learned is that for an environmental signal to be preserved in stalagmite laminae thickness variations, a large perturbation to weather patterns is required – such as prolonged wet or dry years associated El Niño or La Niña.

“But in regions where there is a seasonality of precipitation, the long-term constant growth rate of laminated stalagmites provides an unparalleled capacity for precise chronology building.”

The researchers found that between different locations around the world, warmer climates tended towards more stalagmite growth over time, while colder climates saw growth slowed.

But the research showed that the majority of stalagmite samples, irrespective of location, followed a linear growth over the timescale of tens of thousands of years.

“The ‘global average stalagmite’ increased in height by about one metre over the last 11,000 years,” Prof. Baker says.

Snapshot of the past

Analysing the way the laminae are organised can help scientists read environmental conditions and weather events of the distant past. In seasonal climates, these changes in the fabric can occur at regular intervals, producing layers they call ‘annually laminated stalagmites’. But when extreme weather events occur, as happens with the El Niño/La Niña Southern Oscillation phenomenon involving mega-droughts, bushfires and flooding events, variations of thicknesses of stalagmite laminae can provide vital clues.

“We can use other chemical evidence in stalagmites to obtain records of past environmental change, and know exactly when this happened,” says Prof. Baker.

“For example, at UNSW we are reconstructing fire histories from cave stalagmites for the first time. Working in Western Australia, and using stalagmites that have these continuous laminae and regular growth, we can identify how often fires have occurred in the past from the traces left behind from the soluble part of bushfire ash that gets transported to the stalagmite by drip water.”

The researchers say that they still have limited understanding on how crystals grow within each lamina, so future studies could investigate the internal structure of the laminae and the crystal growth mechanisms involved.

The analysis was published in the April issue of Reviews of Geophysics journal.