The Felixer, an autonomous device that can target and cull feral cats in the wild, could be key in rebuilding Australia’s decimated native animal populations. 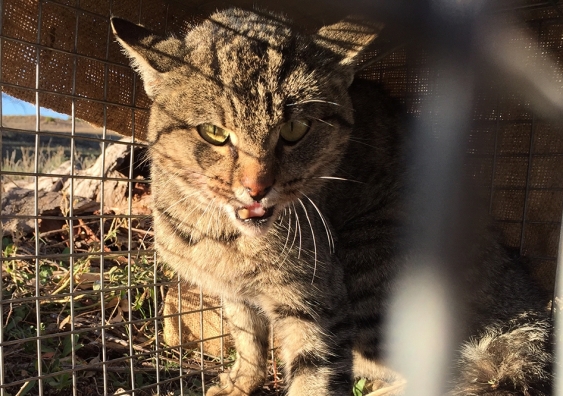 Ecologists from UNSW Sydney have evaluated a promising new method to control the devastating toll feral cats have inflicted on population numbers of Australian native species.

In a study published today in the nature journal Wildlife Research, the authors report on a trial of the Felixer – an autonomous device placed in remote areas that can identify and kill feral cats while easily distinguishing them from other non-target animals. The researchers found that in just six weeks of testing, 20 Felixer devices scattered about a 2600-ha fenced paddock in South Australia eliminated two thirds – or 33 cats – of the local feral cat population.

Lead researcher Dr Katherine Moseby with UNSW Science’s School of Biological, Earth and Environmental Sciences says while cats are deservedly treasured as household pets, their impact upon native animal populations has been lethal – which she has witnessed firsthand.

As one of UNSW’s leading conservation scientists with a passion for Australia’s arid desert fauna, Dr Moseby has spent the past couple of decades trying to bolster the dwindling numbers of native species such as bilbies, burrowing bettongs, western quolls, stick nest rats and western barred bandicoots. But attempts to reintroduce them back into their natural habitats have been thwarted by feral animals, especially cats and foxes. It has been very common for repatriated animals to become once again, completely wiped from an area, Dr Moseby says. 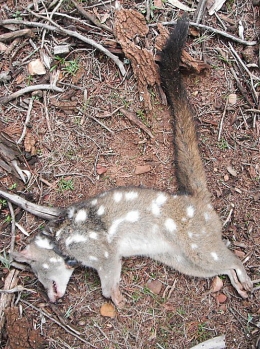 Western quolls are some of the native species that are preyed upon by feral cats.

She recalls one time after a release of bilbies into the wild outside the Arid Recovery Reserve in  South Australia that was particularly galling.

“We released the bilbies, and literally within only a few days, I was radio tracking one of the females that had a pouch young, and I found her dead under a bush where it had been killed by a cat. The pouch young was still alive and was dying,” Dr Moseby says.

“When you see these beautiful, threatened native species, just time and time again being ripped apart by cats and foxes, you realise that although cats are really amazing animals, they don't belong in the wild. And they're really causing huge impacts to our threatened species.”

She says the impact of feral cats has become such a problem that releasing threatened species back into the wild is usually only successful if it occurs in fenced-off sanctuaries or on offshore islands.

“I've been doing reintroductions of threatened species for 20 years and almost every reintroduction attempt that you do in the wild fails due to cat or fox predation,” says Dr Moseby.

“Most of the reintroductions that happen now in Australia happen on islands or fenced reserves where they've eradicated all the feral animals. So we don't do very many reintroductions now into open landscapes because of the threat of cats and foxes.”

What makes eradication of feral cats so difficult is that they don’t take baits as readily as other feral animals like foxes and rabbits. Cats in the wild prefer to live off prey they have hunted and killed. Another problem with baiting is that it has the potential to harm the animals it is there to protect.

A Felixer set up in a remote environment gets around both of these problems. First, it can easily distinguish cats from other animals with great efficiency – at a rate of 100 per cent in the most recent study. This means the poison it administers – in the form of a gel sprayed onto the fur of a passing cat – does not inadvertently harm other native animals. And because the poison is ingested by cats as they compulsively groom themselves, it gets around the problem of baits going uneaten.

The Felixer is about 50cm high by 50cm deep and can be left in remote areas to eliminate feral cats. Picture: UNSW

The Felixer is a box the size of a storage crate that is equipped with an infrared camera, four laser sensors and 20 poison canisters. Only when lasers are tripped in a particular way does it register the presence of a cat and fires poison gel.

“The laser sensors are set in a configuration that can detect a cat walking past,” Dr Moseby says.

“A cat will trigger the two middle sensors and not trigger the top and bottom sensor. And it also knows the timing of the cat's walk so it can detect that a cat is walking past at a normal cat speed. So it's the pattern in which the sensors are broken and the timing of that pattern that leads the Felixer to determine that ‘well, this must be a cat’, and it fires a gel out through a hole in the side that squirts onto the cat's flank. The cats goes away and licks its fur and ingests the poison that way.” 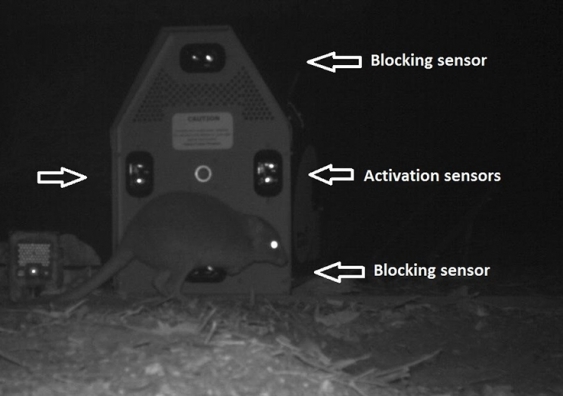 The Felixer can determine whether a feral cat or native animal animal passes by according to which of the laser sensors it triggers.

The poison used in the six week trial was 1080, based on a compound that emulates toxins found in plants like gastrolobiums common to Western Australia. Dr Moseby says it works by shutting down the Krebs cycle in the animal’s metabolism. Because the Felixer’s delivery of it is so targeted, its doses can be set much higher than in baits and death can occur quicker, sometimes within two hours of ingestion, Dr Moseby says.

“One advantage the Felixer brings is that any toxin can be used in the gel,” she says. “We used 1080 because cats are very sensitive to it compared to native animals but you could also use PAPP which is a new poison that basically euthanises animals by putting them to sleep.”

University of Adelaide’s Dr John Read, a co-author on the paper and original inventor of the Felixer, says the device is still in trial stage and so quite expensive, with each unit costing about $15,000 to manufacture. He says the next step for the developers is testing its use in many different habitats and environmental conditions. For now, he says its use would be best suited to areas that were confined.

“We think that one of the most effective uses will be to eradicate cats from islands where you've got colonies of seabirds, or small mainland colonies of threatened species that are really susceptible to cat and fox predation,” he says.