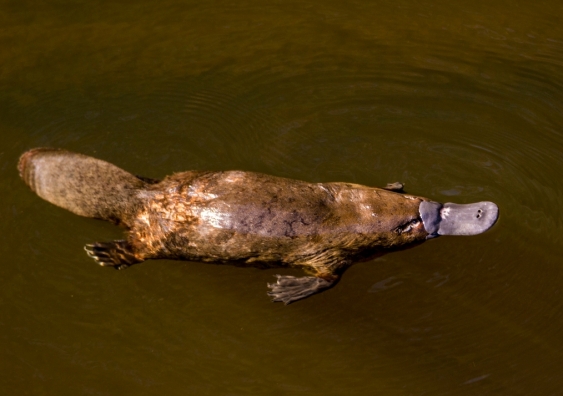 The study examined the genetic makeup of platypuses in free-flowing and nearby rivers with large dams in New South Wales. Photo: Shutterstock.

The platypus is possibly the most irreplaceable mammal existing today. They have a unique combination of characteristics, including egg-laying despite being mammals, venomous spurs in males, electroreception for locating prey, biofluorescent fur, multiple sex chromosomes, and the longest evolutionary history in mammals.

Platypuses are a threatened species in some Australian states and their conservation is of concern more broadly, due to known decline in their populations.

A new study published in the international journal Communications Biology examined the genetic makeup of platypuses in free-flowing and nearby rivers with large dams in New South Wales. These included the free-flowing Ovens River, along with the dammed Mitta Mitta River, and the free-flowing Tenterfield Creek, as well as the nearby Severn River regulated by a large dam.

"We extracted the DNA from the blood collected by our Platypus Conservation Initiative researchers at UNSW. By using thousands of molecular markers, we were able to identify a strong signal indicating that genetic differentiation increased rapidly between platypuses below and above these large dams,” said lead author Dr Luis Mijangos, a former UNSW PhD student who is now at the University of Canberra.

A threat to platypuses identified

Professor Richard Kingsford, Director of the UNSW Centre for Ecosystem Science and one of the paper’s authors, said, “This is a profound result with significant implications for platypus conservation".

“We've long suspected that prey can restrict platypus movements, but this is the ‘smoking gun’. These animals just can't get around big dams."

Read more: Platypuses likely gone from Royal National Park – but they may come back

This movement restriction of platypuses separated by large dams means there is limited or no gene flow between groups, making these separate populations increasingly vulnerable to threats. There is increased possibility of inbreeding depression, loss of adaptive genetic variation, failure to recolonise areas where local extinctions have occurred, and failure to disperse to areas with more suitable conditions.

"We know that platypuses are declining in many parts of their range in eastern Australia, affected by many threats. This study identifies one of the main threats to this iconic species,” said Dr Gilad Bino, leader of the Platypus Conservation Initiative at UNSW Sydney and another author of the study.

“There is still much we don’t know about the ecology of the platypus, but given its international status as a monotreme, it is increasingly vital that we understand and manage the threats to this unique species.”

Read more: Changes to river flows are having a 'damming' impact on platypuses

The authors recommend that water conservation and management planning should consider alternative approaches to large dams. These could include storing water in off-river reservoirs and implementing strategies to reduce the effects of dams, such as the artificial relocation of individual platypuses between groups above and below dams, or the construction of passage structures that increase dispersal.