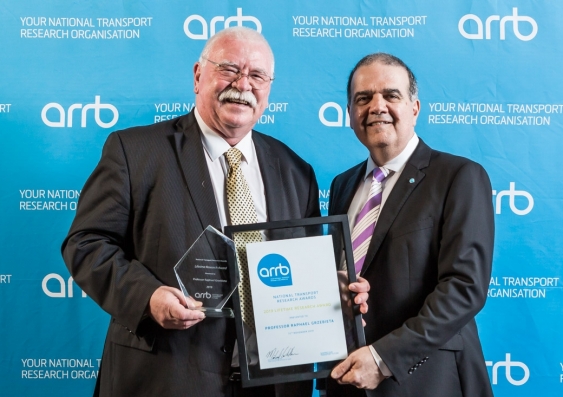 Global road safety expert UNSW Sydney Professor Raphael Grzebieta has been awarded his second Lifetime Achievement award for 2019. His recognition at the National Transport Research Awards this week adds to the 2019 Kenneth A Stonex award he received in February.

His most recent award was presented by the Australian Road Research Board (ARRB), Australia’s national transport research organisation. The Lifetime Achievement Award is presented in recognition of an individual’s outstanding leadership and contribution to the road and transport sector for more than 25 years.

“It is an honour to be recognised as making a significant contribution in saving lives, helping reduce road trauma in Australia and around the world,” Professor Grzebieta said.

“Many people die and are seriously injured on our roads. Making an error on our roads should not result in a death sentence. As a research engineer, I have worked towards making the vehicle and road system safer so that if road users make an error, they will survive with no lasting health effects.”

Currently Professor Grzebieta is researching the reduction of speed limits on highways and suburban and high pedestrian active streets to survivable limits.

“Being struck at 50 km/h is equivalent in speed to jumping out of the top floor window of a three-story building. Around one in three people die who are struck at this speed. At 40 km/h the fatality risk drops to just over one in ten impacts and the equivalent to falling off the roof of a house – a much more survivable outcome,” Professor Grzebieta continued.

Professor Grzebieta is currently involved in the Australian Naturalistic Driver Study to provide a complete picture of driver, vehicle and road user behaviour in all driving situations. While some important revealing papers have already been published on driver distraction, the findings of this study will take many years of work before additional papers are published identifying what drivers and other road users do on Australian roads.