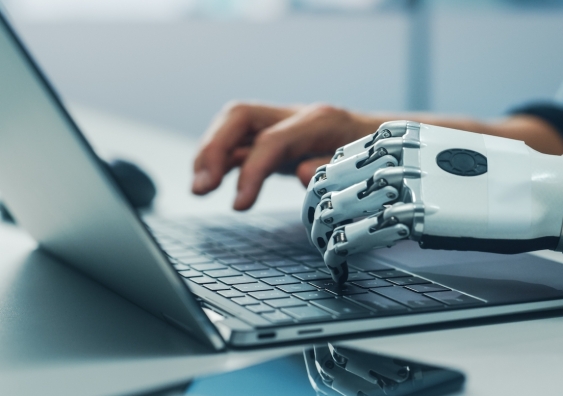 Artificial intelligence will be able to read and understand news articles and create its own stories, changing how we think about news and how we consume it. At least, that’s one idea generated by a web-based Artificial Intelligence (AI) application that authors short stories.

Its creator, Rodolfo Ocampo, a PhD student from the School of Art & Design at UNSW Arts, Design & Architecture, investigates how AI can enhance human creativity. His research involves co-developing an interactive model where humans and AI have creative conversations. The idea is to investigate how humans can draw inspiration for stories from an AI-generated starting point.

“I do think we have a say in where [AI] technology goes,” he says. “So, it’s important to consider how humans interact with AI in a way that it helps us in our creative process.”

Mr Ocampo sees AI as not a replacement for human creativity, but as a creative partner. In the case of Narrative Device – the creative AI system behind the lead sentence of this story – he says the main benefit is helping people overcome creative blocks.

“The feedback that I received from users is that it helps overcome the blank slate problem, which is a big obstacle when starting to write, providing an initial spark that gets the creative process going,” he says. “More broadly, it can also keep the creative flow going later in a project, giving you ideas that can help get you through moments where you get a bit stuck.”

Narrative Device was built by Mr Ocampo using the OpenAI GPT3 API, one of the most capable natural language models to date, trained on millions of gigabytes of text data from the internet. The algorithm analyses text from across the web to create an opening paragraph based on the two thematic inputs from a user – in the case of the first paragraph of this story – ‘news’ and ‘artificial intelligence’. So far, more than 4 million short stories have been generated using the tool.

While Narrative Device was trained specifically to create short stories, Mr Ocampo says other tools use the same underlying principles to create poetry, write press releases and review research papers. With a few tweaks, Mr Ocampo says it could even produce an entire long-form story. But he says it’s better off supporting, rather than substituting, human creativity.

“While it could output a full story, it’s interesting to see how humans interact with the creative algorithms,” he says. “Because we do consider creative activities as being one of the things that we enjoy doing the most as humans, I question whether we would want to be automating this.”

He says another focus on creative algorithms is how they will open up new avenues and mediums for creative expression.

“Every creative tool throughout history, from a paintbrush to a keyboard, influences the creative process because it has specific affordances that lead the creativity towards a certain direction,” Mr Ocampo says. “An AI system, with much more agency and initiative than such tools, is exciting to see how it can influence the process to a larger extent.”

But Mr Ocampo says it is unlikely that AI creativity will replace the need for human creativity entirely. But he says it doesn’t mean that it won’t become more prominent.

“I don’t know if we would appreciate fully-automated creative artefacts because one of the main appeals of art is the artist that you’re connecting with. If something is entirely robot generated, I’m not sure we engage with it on that level,” he says.

“I do think it is inevitable that we will be consuming some form of AI-generated content, particularly music and videos, in the near future. And if the metaverse comes to fruition, many of the experiences will be generated by algorithms.”

“Perhaps at the commercial level, content distribution might one day become fully automated and AI-generated, which has grim economic and cultural implications. Perhaps that means no one will be able to make a career out of doing creative activities,” he says.

Mr Ocampo says that even if AI-generated content were to dominate our news feeds and playlists, creativity is still innately human. Ultimately, when it comes to human creativity, he predicts AI systems will take part rather than take over.

“Even in those scenarios, I can’t see human creativity dying,” he says. “I do think humans will always have a need for creativity. It’s very fundamental to who we are that we need to express ourselves and be creative.

“If anything, AI might one day give us all the time in the world to make all the art we want.”