It's becoming clearer that climate change can have devastating impacts on economies. What can we expect in the upcoming 2022-23 federal budget to minimise this? 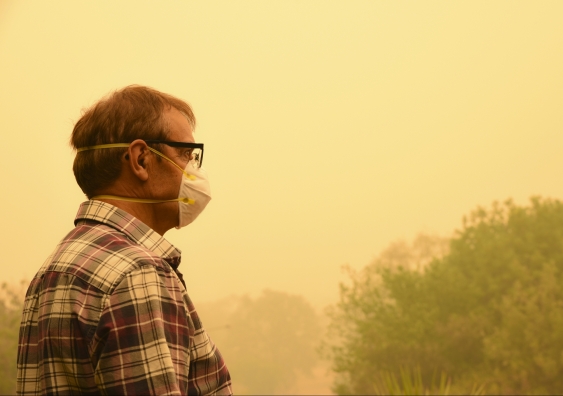 Climate change can have devastating impacts on economies. Photo: Getty

When it comes to discussing economic growth and growth in action to curb climate change, the discussion has too often framed them as sides that are in opposition. But today, with devastating, climate-change fuelled events causing billions of dollars worth of damage around the world, it’s become clear to many that this is a misleading way to think about the economy and climate change.

In Australia, the 2019-20 bushfires that were heightened by global warming caused an estimated $4 billion to $5 billion in damage to the economy. The COVID pandemic outbreak caused major damage to the global economy and has possible links to human actions that drive climate change. Recent flooding events have devastated communities, farms and supply chains in Australia, as well as displacing millions worldwide.

"One of the reasons that we’re seeing this shift in belief is that the prior warnings from scientists in the '90s and even earlier are proving true thus far,” says Dr Tim Neal, Senior Research Fellow at the School of Economics, UNSW Business School, who specialises in the economics of climate change.

“It is easier for people to believe in something that they can personally observe somehow.”

Read more: Helping the global environment, one footprint at a time

From experiencing rising costs of insurance, to disruptions of workplaces, and increase in damaging, climate-change influenced, natural disasters, it’s clear to many now that a lack of climate change action isn’t just bad for the planet generally. Climate change inaction is very much a bad economic bet.

Now, Australia's government has announced that it will restart factoring climate change into its economic modelling, after a nine-year hiatus since PM Tony Abbott came to power.

Coupled with a climate change bill that set a national emissions target for 2030 and a 43 per cent emissions reduction target, what does all this mean for what we can expect to see in Labor’s updated budget coming at the end of October?

Wait … why is the economy tied to our climate?

The relationship with economics and climate change is of vital importance to the community, says Dr Neal.

One of the assumptions of prior economic research – that economic growth is "unabashedly positive" no matter how it is generated – is fast breaking down in the face of climate change, he says.

Read more: How work should help when disaster strikes

“Economic models predict that severe climate change is going to cause between positive 2 per cent to negative 23 per cent of damage to global average GDP per capita by 2100. Most lie within the negative 1 to negative 12 per cent range.

“The uncertainty and potential severity of significant climate change are extreme and to the highest degree possible. So, as a species, we really need to be addressing it right away.”

Read more: Food security: the world is hungry for a solution

Okay – but what specific impact would climate change actually have on the economy?

Climate change can impact the economy in several known ways, as well as potential channels that are at this time, unknown, says Dr Neal.

This includes conflict (potentially as a result of natural resource decline and competition for dwindling resources), which in itself could also damage the climate. Another big one? Biodiversity collapse.

"Our species relies on biodiversity in very complex and very fundamental ways,” he says. “If there was a collapse, this might impact our ability to pollinate our crops, have fertile soil or maintain crop yield. There's also a lot of evidence that human-wildlife interaction significantly increases the risk of viral spill over: an interesting one, especially given our recent experience of COVID-19 shutdowns across the world.”

Read more: Opinion: Labor's plan to save threatened species is an improvement – but it's still well short of what we need

Extreme weather also has its impact, with a quick succession of events having a compounding effect on the damage to humans and property, making it a major issue for any government.

“There comes a point where governments can no longer rebuild damaged infrastructure and private companies can no longer insure assets,” Dr Neal points out.

“Here in Australia, we're already having a discussion of whether we should be building housing developments on flood and wildfire-prone areas, whether these areas will be insurable in the future, and whether the government should start buying back properties to correct this mistake.”

Makes sense. So, what might the Australian government do about the climate in the 2022-23 budget?

While the government recently laid out its emission reductions targets in the Climate Change Bill for 2030 (43 per cent reduction on 2005 levels) and 2050 (net zero), they haven’t yet laid out the mechanism for how this will be achieved, or who would pay for it. Dr Neal suggests they are likely to take a hybrid approach come Wednesday, October 25, when the budget is unveiled.

“It would make sense for the government to announce funding in the budget for subsidies and other environmental initiatives, while later using the existing safeguard mechanism to ensure companies are also reducing emissions themselves,” he explains.

While these are likely to appear in the budget, we won't know the full details till budget day.

With inflation rising and the Reserve Bank trying to fight it with interest rate increases, won’t this mean we’ll see less emphasis on emissions reductions in the budget?

“With inflation primarily caused to disruption in global supply chains due to the Russian war in Ukraine and the lingering effects of COVID, there is a renewed focus in many countries on reducing their economy’s reliance on energy imports to fuel essential or strategic activities,” says Dr Neal.

While Australia has both abundant fossil fuel and renewable energy potential, the one fossil fuel that Australia relies entirely on imports for is oil. According to Dr Neal, this is another area where measures that might be included in the budget, such as encouraging electric vehicle take-up, have real potential to help, as they reduce Australia’s reliance on oil imports.

“With COVID and Russia’s invasion of Ukraine impacting Europe, and the ensuing inflation on petrol prices, there is a special emphasis now on reducing our reliance on global supply chains (which are fragile) to conduct essential or strategic activities.”

Read more: What is greenwashing and why is it a problem?

Dr Neal says all this has hammered home to Australia and other governments around the world the advantages in being self-reliant on energy production, particularly in an unstable geopolitical environment.

One way of doing this? A rise in electric vehicle take-up in Australia.

“So, it makes economic sense to encourage this before we even factor in climate change,” explains Dr Neal. “But the government will need to consider recent actions from the Reserve Bank of Australia (RBA), and how significant government spending measures will work contrary to interest rate rises on inflation,” says Dr Neal.

What would you want to see in the budget for meaningful action on climate change and the economy?

Dr Neal says while the government might announce direct spending measures that are important for climate change and the economy during the budget, some of the most urgent reforms require legislation to go through.

For example, a mechanism to ensure companies are reducing emissions (such as ex-PM Julia Gillard’s carbon pricing), or significantly reducing deforestation and land clearing of forests (which help to reduce emissions), would need this.

He also points out that Australia enables an enormous number of emissions by exporting fossil fuels: “Perhaps the biggest impact the Australian government has with climate change is its power to approve fossil fuel exploitation developments,” he adds.

Agriculture is also one of the biggest emitting industries in Australia.

Read more: Why plant-based 'milks' are rising to the top

“The raising of cows for meat or milk results in a significant amount of methane emissions and is the primary reason for most of the deforestation that is happening in Australia right now,” he says. “Anything the government can do to encourage people to consume less beef will help.”

Positive actions for the climate and the economy could also include renewable electricity infrastructure, battery/solar subsidies for households and businesses and availability of public transport.

“Subsidies for electric cars are good,” says Dr Neal. “But their use for climate change will be limited while coal and gas continue to dominate energy production in our grid.”