This World Pancreatic Cancer Day, we’re highlighting some of the many UNSW Sydney researchers working to improve patient outcomes. 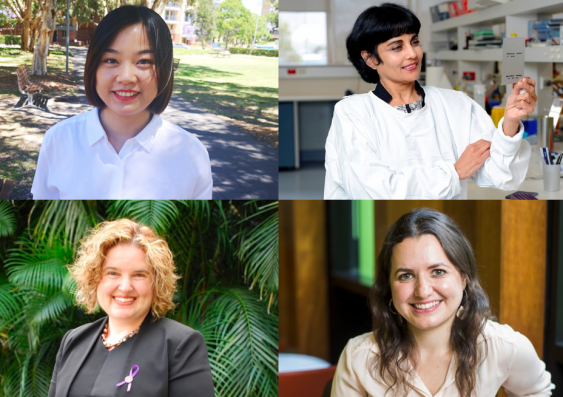 Pancreatic cancer is an insidious disease – it is often diagnosed at an advanced stage, with about 90% of patients dying within five years of diagnosis. New projections suggest pancreatic cancer will be the second leading cause of cancer mortality by 2025.

This World Pancreatic Cancer Day, we are celebrating some of the many UNSW researchers who are dedicated to changing those statistics. Cancers with poor outcomes – like pancreatic cancer – are a key focus area in UNSW Medicine's cancer theme.

Associate Professor Phillips is the Head of the Pancreatic Cancer Translational Research Group and Deputy Director of the Adult Cancer Program at the Lowy Cancer Research Centre at UNSW Medicine.

This year, A/Prof Phillips was a key driver in establishing the Pancreatic Cancer Research Hub, which aims to double the survival of patients with pancreatic cancer by 2030.

She says World Pancreatic Cancer Day is a powerful advocacy event to increase community and government awareness of pancreatic cancer.

“It is also a time to reflect on the progress we have made in understanding this terrible disease and focus on the next steps to overcome current clinical challenges to ensure our research efforts bridge the gap and, as in other cancers, improve the outcomes for our patients with pancreatic cancer.

“I know that we are on the brink of overturning the unacceptable statistics. Uniting researchers with the community – who, unlike in other cancers, don’t often get to be a strong voice advocating for themselves – and Government will ensure Australian researchers continue to make positive change for pancreatic cancer patients globally.”

A/Prof Phillip’s group has developed a novel cutting-edge way to keep pieces of human pancreatic tumours alive in the laboratory for two weeks after surgical resection.

“Our capacity to grow human tumour tissue in the laboratory provides a valuable new clinical tool to test how a patients tumour responds to different chemotherapies and has the potential to immediately inform patient treatment options. Our unique tumour model is superior to other models because it is human in origin and it contains the complex tumour environment present in patients.”

In 2016 A/Prof Phillips had a major breakthrough, successfully developing a novel nanomedicine – a tiny drug delivery vehicle – consisting of a state-of-the-art nanoparticle that can package gene therapy to inhibit any tumour-promoting gene in pancreatic cancer.

With the generous support from the Brian O'Neill Pancreatic Cancer Fundraising Dinner – held last night – the team will be able to perform essential preclinical studies to test the therapeutic potential of their nano-gene therapy in combination with a clinically approved drug. They also plan on using their expertise to improve the bioavailability of the clinically approved drugs using a nanomedicine approach.

Professor Minoti Apte was the first in the world to isolate and characterise pancreatic stellate cells, a cell type that is now known to play a major role in the progression of both chronic pancreatitis and pancreatic cancer. Coming up with ways to target these cells to prevent them from doing harm is now a major focus of her team’s research.

The group has now shown that interrupting the cross-talk between cancer cells and surrounding cells in the microenvironment by targeting a certain signalling pathway reduces tumour growth and eliminates metastasis in early as well as advanced pre-clinical models of pancreatic cancer.

“We have also shown that targeting this pathway reduces the risk of recurrence and progression after surgical resection of pancreatic cancer in a mouse model, and are currently working on possible pathways to take our laboratory findings to the clinic,” Professor Apte says.

“To me, World Pancreatic Cancer Day is a great opportunity to raise awareness in the community about this deadly cancer, but it is also a day to admire the courage and resilience of patients and their carers. These are the people that spur us researchers on to continue working hard to develop new therapeutic approaches to improve outcomes.”

Last year, Professor Apte received the Gastroenterological Society of Australia (GESA) Distinguished Researcher Prize 2018. In 2014 she was awarded the Medal of the Order of Australia (OAM), after being named the NSW Woman of the Year in 2015. She was also the 2016 recipient of the Professor Rob Sutherland AO Make a Difference Award at the NSW Premier’s Awards for Outstanding Cancer Research – an award that recognises highly successful research that is actively changing cancer treatment and improving patient survival.

Dr Angelica Merlot, who is based at the Children’s Cancer Institute, focuses her research on developing new anti-cancer drugs that target drug resistance and suppress cancer spread.

This year, the cancer researcher has won the 2019 NSW Young Woman of the Year award for her achievements and research into treatments for pancreatic and brain cancer. She also won a 2019 Young Tall Poppy Science Award and the 2019 NSW Early Career Researcher of the Year (Biological Sciences) at the NSW Premier’s Prizes for Science & Engineering.

Dr Merlot says today is an important day to raise awareness about one of the world's toughest cancers.

“This is crucial as it broadens community knowledge, inspires action and supports further research funding for this cancer. It's also a time to remember those whom we have lost and those currently fighting this disease,” she says.

“Although we've seen a small improvement in the current survival rate, a lot of progress is still required. Further translational research means that there is a greater likelihood that the survival rates can be increased and the journey and treatment of those affected by the cancer can be improved.”

Dr Merlot became focused on cancer research as an undergraduate. Her interest in aggressive cancers, such as pancreatic and brain cancer, was motivated by lack of improvement in survival rates over the past decades, largely due to late diagnosis, a lack of screening programs, low awareness of symptoms and a lack of treatment options.

After moving to UNSW Medicine as a Scientia Fellow in 2018, Dr Merlot focused on understanding the mechanisms by which cancer cells grow and adapt to their environment, why drugs become less effective and the development of nanoparticles to improve drug delivery.

Dr Merlot’s current projects are investigating part of a human cell called the endoplasmic reticulum (ER). The ER is a type of organelle, or subunit within a cell, that has been shown to help cancers grow, spread and develop drug resistance.

Dr Ying Zhu will lead a team of researchers from UNSW to discover much needed early detection methods for pancreatic cancer patients: the UNSW Medicine researcher today received $100,000 grant from the Avner Pancreatic Cancer Foundation. A/Prof Phillips is a co-investigator on this grant.

As current approaches to this research are time and labour intensive, the team will develop an integrated and small device based on nanotechnology for rapid and sensitive exosome analysis. The team will define a set of biomarkers that can differentiate between cancer and non-cancer subjects from cells and plasma carrying early signs of human pancreatic cancer. This novel technology will also be applicable for doctors monitoring the development and customising the treatment of a patient’s tumour.

“Pancreatic cancer is difficult to diagnose in the early stages. Early tumour can’t be observed during routine physical exams as the pancreas is deep inside the body. Most patients are diagnosed when the cancer has become very large or has spread to other organs. A method to detect pancreatic cancer early on is urgently needed,” Dr Zhu said.

“My project team aims to develop a blood test to detect pancreatic cancer in the early stages. The team will target exosomes, which are nanosized fragments released by cancer cells. Exosomes are important for communicating messages and transporting materials between cells. Exosomes have been identified as more accurate and promising biomarkers, or biological clues for pancreatic cancer diagnosis,” Dr Zhu continued.

“We are pleased to award funding to this innovative project,” said Michelle Stewart, CEO of the Avner Pancreatic Cancer Foundation. “We are encouraged by the high calibre of the research and believe that investment into projects like these will help us to increase survival for people diagnosed with pancreatic cancer.”